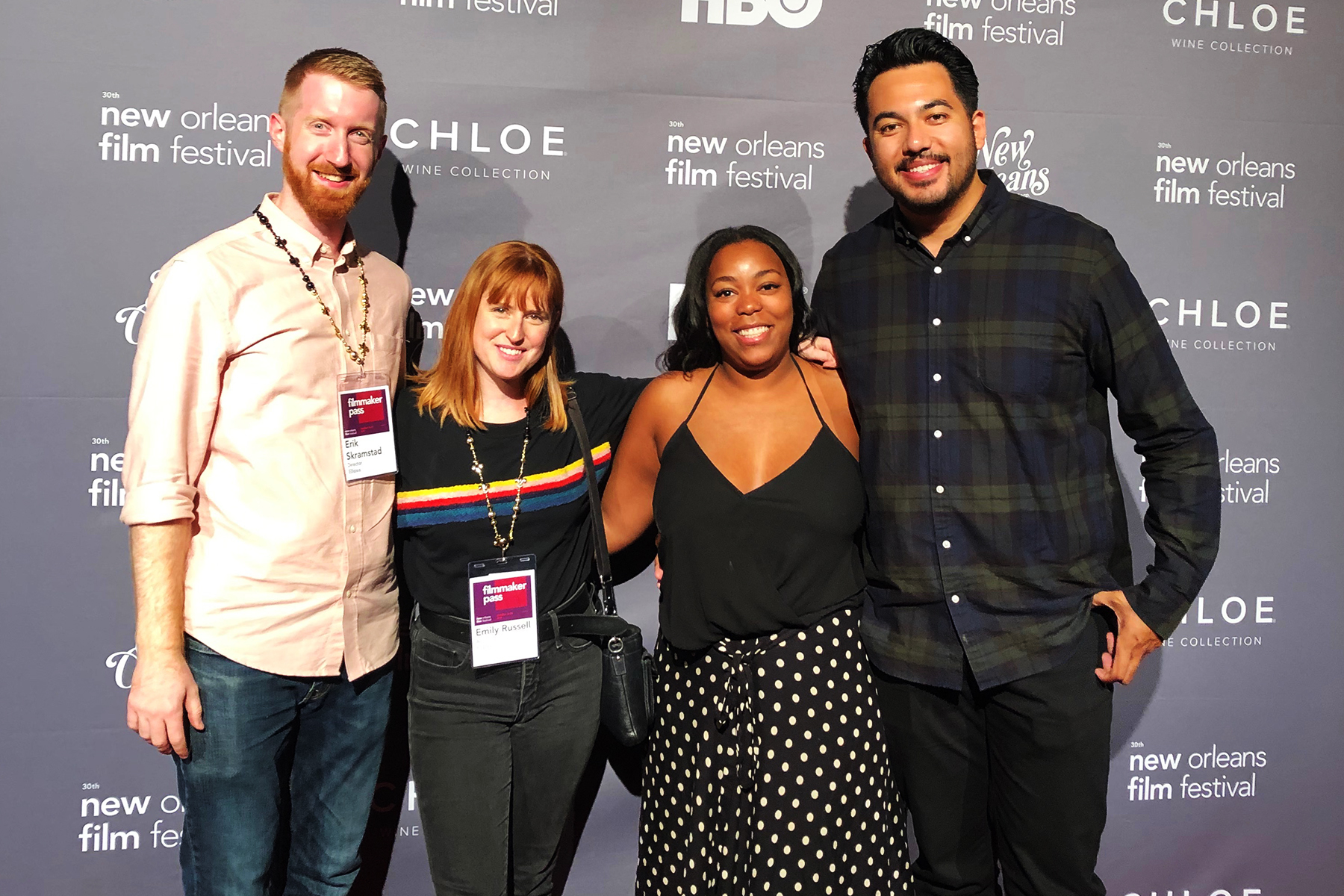 Learning As You Go: A Miniflix Interview With Sweet & Spicy Filmworks

Learning As You Go: A Miniflix Interview With Sweet & Spicy Filmworks

The four-person creative team behind “Ellipsis” talk about collaboration, doing your homework and knowing when it’s time to take a chance.

Writer’s block may seem like a familiar trope in movies, but in the short film “Ellipsis”, the anxiety-inducing phenomenon takes on strange, surrealist dimensions that bring new life to the concept. Co-directed by Erik Skamstrad and Andre Herrera, written by Emily Russell, and produced by Christa Beth Watkins, this charming short doesn’t just have style; it also has something to say, and anchors its visual surprises in two heartfelt performances.

Miniflix talks today with the four key creators behind “Ellipsis”, also known as the production collective Sweet & Spicy Filmworks. They talk with us today about the nature of their collaboration, the difference between working on a short film and working on a major studio project, and the importance of just doing the work.

Andre Herrera: Two and a half years ago, a friend and I interviewed for the same job. We were told that they wanted to hire both of us, because we were very complementary and were like sweet and spicy. That stuck with me ever since. I knew I liked that idea, I just didn’t know where to apply it. At that point, I was hanging out with Erik…and I approached him because we were working together on a lot of other projects in the past. So I asked “would you like to do something together?” It eventually became the three-headed monster with me, Erik and Christa. We’re still learning as we go.

Erik Skamstrad: Andre had AD’d [assistant directed] on some of the music videos I’d directed. We work well together, because I can get very big picture sometimes, while he’s very good at being the realist and working out the logistics of it… So we did a couple of other comedy shorts with some friends under the Sweet & Spicy banner, but “Ellipsis” was our first narrative project as a company. 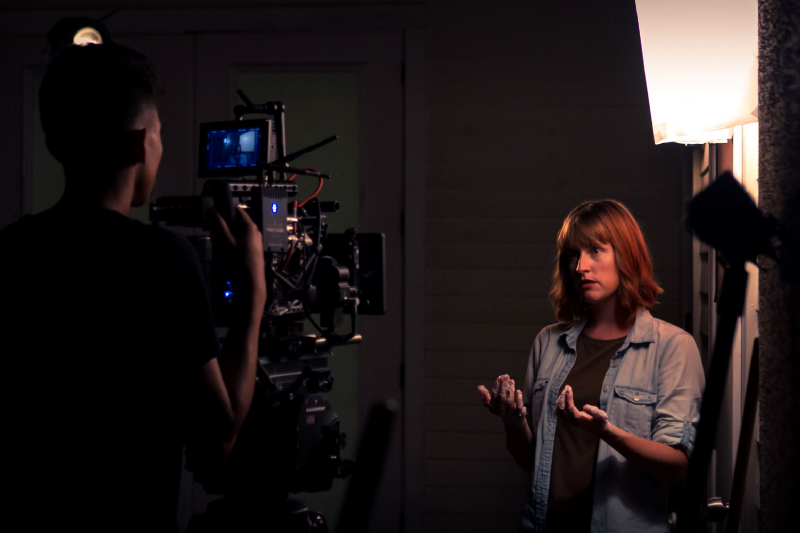 On the set of “Ellipsis”

Miniflix: Emily, what was the inspiration for the “Ellipsis” script?

Emily Russell: I originally wrote it as a project for me and a friend. I wanted to see more women on screen and to try my hand at writing. But I sat on it for a little bit. It got to a point in my acting career where there was so much waiting for people to allow you to be creative. I was frustrated with that. I wanted to take that into my own hands and make something from the ground up. That was new for me, but very exciting. So I rewrote the script a little bit. The dynamic between the women was always there, but the surreal elements came in at this point. Then I approached these guys [Erik, Andre, Christa]. I remember composing this email that was very firm. I basically said “Hey, I wanna make this now. If you want to make it, I want you to make it. But if you don’t, then I’m going to take it elsewhere right now.” That was a very interesting email to compose because we are all friends.

Miniflix: Did it take awhile to get to the point where you were confident enough in the script to make the decision to write and send that email?

Emily: Before I composed that email, I already knew that I wanted Sweet & Spicy to do it. They were pretty new and I knew they were interested in venturing into narrative work. So it was perfect timing. I met with Steven Pfeil a couple of times, who ended up being our editor. I bounced ideas off of him for two weeks before I brought it to Sweet & Spicy. We did end up doing a lot of rewriting after these three signed off on the project.

Miniflix: Can you all talk about the funding process?

Erik: We had brunch with another friend of ours who had done a $30,000 short film. We just tried to pick a lot of brains before even starting any campaign. Steven Pfeil gave us the Seed & Spark recommendation. Then Emily and I did a bunch of our own research. Emily: Seed & Spark is really cool. They have a comprehensive online class for crowdfunding for films specifically. Erik: The course is free. All of the resources are. You just have to make an account. They’re very no-frills, straight-on about how to raise money. Not just for your film but to build an audience for a career in indie filmmaking. Christa: It also creates a community too because the platform is specifically for filmmakers. There’s so many times in other crowdfunding platforms where you just see a “give me” attitude. So the question becomes, what am I getting out of it? Besides the usual incentives someone gets for each block that they go. But it’s a community in a way because you feel this overwhelming desire to support other filmmakers doing what they want. You appreciate the hard work that you, and they, are doing. Erik: The other nice thing about Seed & Spark is that you have to propose your project. We had to make a pitch video to them, but it’s also the pitch video you’ll be using to whoever you want to be investing in your project. They will watch it and give you critiques and tell you how to change it. Christa: They won’t accept everything. They will tell you what you need to refine. 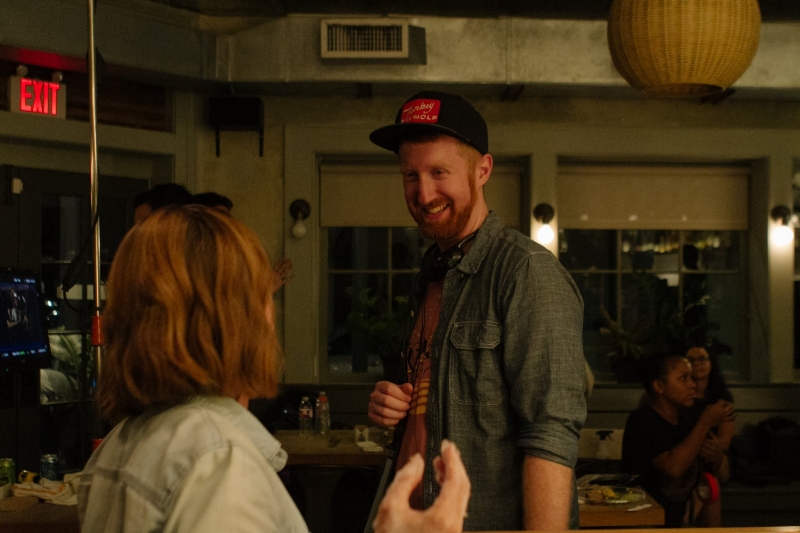 Erik and Emily discussing a scene.

Miniflix: What was the on-set dynamic like? All of you are friends and have worked with each other on other set environments, whether it was a studio film or a TV show or a music video. Does the set run differently when everyone is friends and working on something this personal?

Christa: Back before we had budgets that we were sticking to, we all wore a thousand hats…but what happens then is that all the positions start to bleed into each other. But with “Ellipsis”, we had a real budget. People were accountable to us, and it made us stay in our lane. You can really only focus on one thing at a time if you’re doing it right. Physical production was very harmonious.

Erik: And it helped that most of our crew were already friends. Andre and I work really well together. I’ve had bad experiences in the past where two directors are giving actors notes. So we had a really smooth on-set flow. Having two directors on this was actually a huge asset. It allowed us to cut, discuss, then one of us would talk to cast and the other would talk to camera.

Andre: And a lot of that came from him and I having conversations well beforehand. Many of the actor notes would go to Erik, because he knew what I was thinking already. A lot of our job together was just making sure that we were re-convening at the end of the day and making sure everything was lined up and ready to go.

I’m reminded of something I once heard at college. Setting up a movie is like setting up a party. You got to find out who’s bringing what. You have to find out what time people are arriving, and so forth. The goal is to have a fun party at the end. So that’s the same kind of mentality we brought to “Ellipsis”.

Miniflix: So many people make short films for different reasons, particularly when it comes to the distribution and exhibition side. Was the film’s life after the final edit something you were thinking about at all during the making of the film itself? Or did it only come after?

Emily: When we were sitting down at the table reads, I knew we wanted to do a festival run. But honestly we weren’t really seeing past that at that point. The goal for me was to get my creative juices flowing and make something.

Erik: We all saw this project as something that was meant to be produce-able. We wanted to make sure we did it in the most professional way possible where we had department heads that we were paying, a full post process and doing everything above board. Doing the festival circuit was also part of that. Like Emily said, this whole thing has been a learning process for us.

Andre: All of this hearkens back to the idea behind Sweet & Spicy. We want our mission to be that your idea can blossom with us. So how can we say that if we couldn’t learn to blossom among the closest people around us?

Christa: Now other people who are writing or just have nagging ideas in their head can come to us knowing that it’s possible to help them work on it. It’s made what we do more tangible somehow. Whether anything more happens with the film or not, the one thing that I know I can be very proud of was that we said we were going to do something, and we did it.

To learn more about Sweet & Spicy or to pitch them an idea, visit https://sweetandspicyfilmworks.com/.