Hinting At A Larger Life: A Miniflix Interview With Marshall Curry 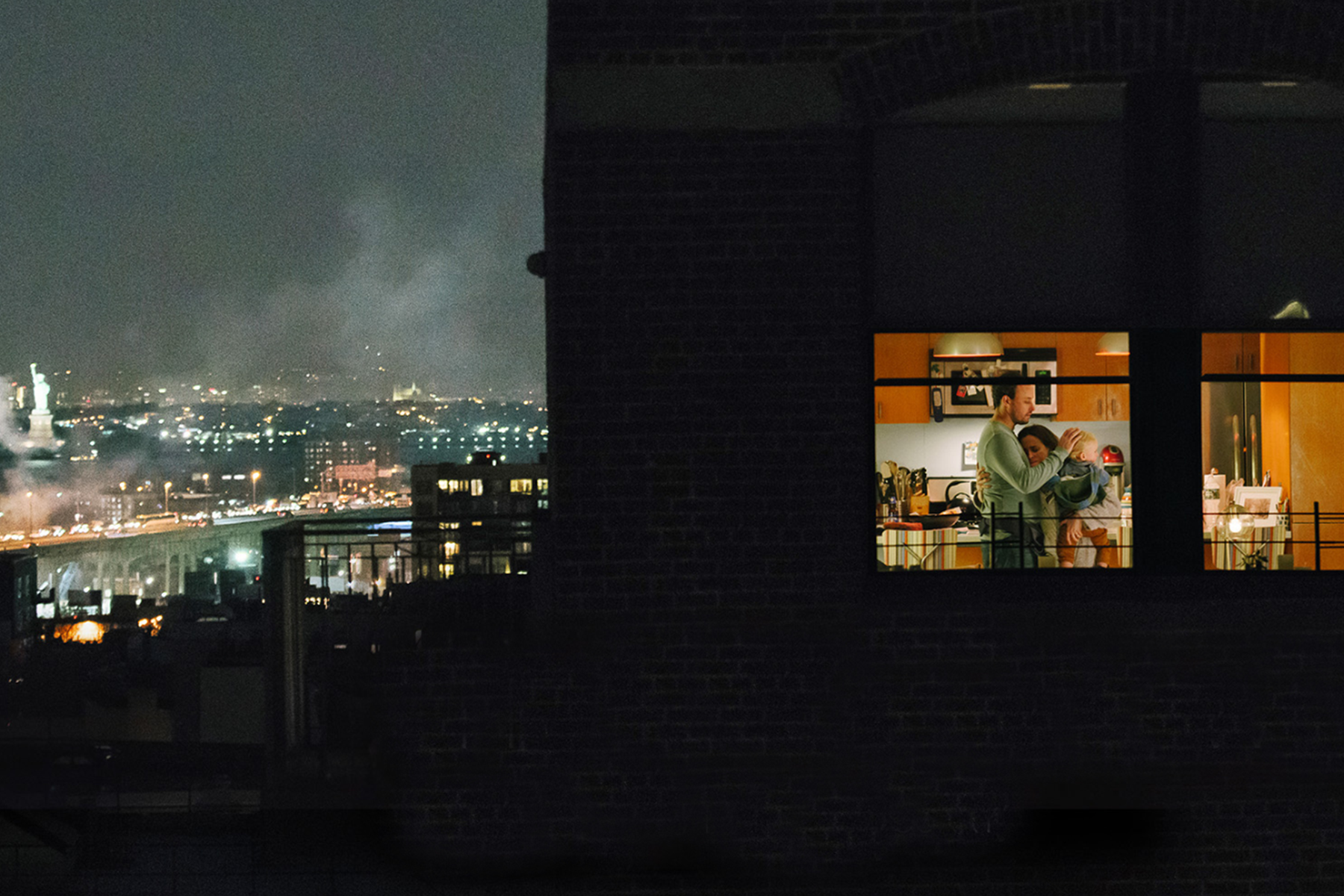 Hinting At A Larger Life: A Miniflix Interview With Marshall Curry

Just one year after an Oscar nomination for his harrowing portrait of Nazism in 1939 America,  “A Night In The Garden”, Marshall Curry will be returning to the Dolby Theatre for a much different kind of film. “The Neighbors’ Window”, his first foray into narrative filmmaking, follows a middle-aged couple who become wrapped up in the lives of a younger couple across the street. At times funny, at other times sad, this absorbing short covers the gamut of human emotion while staying rooted in themes Curry has been exploring his entire career (such as the power of empathy and perspective).  We talk to Marshall about going from documentary to fiction, managing genre expectations and experiencing the film’s revelation with an audience.

Miniflix Interviewer: How did you know that “The Neighbors’ Window” would be your first narrative project? What was the inspiration for telling this story?

Marshall Curry: When I decided that I wanted to try making a short fiction film, I remembered a story that I had heard on a podcast called Love and Radio years earlier in which Diane Weipert told Briana Breen about having a young couple move in across the street from her. It was a beautiful and sad story that was the inspiration for my script. I came up with a twist at the end that turned it into a little O. Henry-type story. And it felt like a good option for a first film because it took place primarily in one setting – it wouldn’t be too difficult logistically. Of course I didn’t realize how hard it would be to find two apartments that faced each other.

Miniflix: What, if any, sensibilities from the documentary world did you use and bring to this project?

Marshall: I didn’t want the film to have a fake documentary look – with shaky camera, or any of that. But it was definitely informed by my love for documentaries and work in documentaries. I wanted it to have the organic, naturalistic feeling that documentaries have – the feeling of messy edges, with a set that feels lived in, sentences left unfinished and people misunderstanding each other.  I also think my documentary work helped me work with actors. When you are making a doc, you try to create a setting where people are comfortable and can present their vulnerable, natural, real selves. When working with actors, there’s a similar goal. Once you have worked out the thoughts and feelings of the character with the actors, the challenge is just helping them get into a place where those thoughts and feelings can show themselves naturally.  I also think that documentarians have very good senses of what feels real and what isn’t. We spend a lot of time weeding out from our footage moments that feel “performed”, and that was really useful. Of course it was the actors themselves who had to do the hard work – I was just trying to create the best environment for them to do that.

The lead characters of “The Neighbors’ Window” stare across the street, obsessed by curiosity.

Miniflix: You’re right; Maria Dizzia and Greg Keller did had big tasks here. They had to convince us that this middle-aged couple could transform from mild amusement at what was happening across the street to compulsive voyeurism – all while remaining human and relatable. They definitely pulled it off, but I’m curious what it was like collaborating with them on set. I’m thinking particularly of their lengthy confrontation scene about five minutes in.

Marshall: Someone told me that 90% of directing is casting, and when Greg and Maria sat down together to shoot the first scene I knew that it was true. Those two were so perfect — likable and frustratingly flawed – and their dynamic together was amazing. I discovered after I cast them that they had actually played husband and wife in a play already, so they arrived with a natural chemistry. It was just one of the many serendipitous gifts that fate gave our film. I had been warned by friends that actors can be difficult creatures to handle, but everyone on this film showed up with an ego-less desire to make something beautiful together, and I really loved the process of working with them on different approaches to the lines and emotions throughout the shooting.

Miniflix: This is a beautiful-looking film and one that brings ideas of perspective and framing to the foreground of the text. Both in the harsh lines and boxes that make up city skyline windows and in the way that the camera reveals and withholds at key moments. What were some of the visual references that you were bringing to this? Can you talk about some of the key creative conversations you had with Wolfgang Held?

Marshall: I couldn’t have asked for a better partner than Wolfgang who taught me so much during the process of making the film. We had worked together on documentaries and it was nice because we had a shared sense of style and an appreciation of naturalism and simplicity. His shooting and lighting has some flourishes – for instance, there’s a scene where the main character goes off screen for ten seconds as the camera just waits, shooting down an empty hall. And there are beautiful shots like the final shot of the film, but everything is in the service of the characters and the story. There’s nothing in the film just because it “looks cool.”

Of course shooting a fiction film is a lot different from shooting verite documentary. In a doc, you are making decisions in real-time, following an improvised blocking and story. With “The Neighbors’ Window”, Wolfgang and I spent a ton of time prepping everything – mapping out all of the blocking and every camera set up before the first day. Once we got on set, we had to tweak our plans – on our second day for instance, we had an unexpected blizzard that we decided to incorporate into the film – and our experience shooting chaotic documentaries together made it easier to roll with those situations together.

Actress Maria Dizzia plays Alli, a middle-aged woman who is intrigued by her new neighbors

Miniflix: One of the most emotional moments comes a little over halfway through, when Alli is seeing things get tragic rather quickly for the neighbors across the street. Through expert editing you manage to make us feel like we’ve been with this couple we haven’t met for their whole relationship, despite only seeing them from a limited vantage point and for a few minutes. Can you talk about trying to make sure we connected with this couple despite the literal and figurative distances that were in place (and the fact that you only had 10 minutes to do it)?

Marshall: It’s tricky to give a sense of time passing and to squeeze character changes into a short film, and even more so for characters who we only view from across the street. I liked that we only see the neighbors a few times in the film – most of the time, we experience them through seeing Alli and her husband’s reactions. But the moments that we do see – a sex scene, a Christmas dance party, a serious moment at the kitchen table – hint at a larger life. In some ways, limiting their screen time allows the audience to fill in a lot about them and feel them more deeply than they would if we tried to show all of those moments on screen.

Minfilix: Did you ever consider expanding to a feature? And if so, what ultimately convinced you the story would be better served as a short (at least for now)?

Marshall: When I decided to make a fiction film I knew that I wanted it to be a short, and I wanted something that felt complete, like a short story does, rather than a scene from a feature. So that was a big part of what attracted me to this story. I have considered how it might work as part of a feature, and I think it could be a storyline in a multi-threaded, Robert Altman-ish feature film. But I am satisfied with it as-is, and most of my energy has been going into a completely new script.

Miniflix: This film is such a refreshing blend of genre (the “Rear Window” esque thriller) and social realism, that I can see it taking audiences by surprise at first. What was it like premiering this film to an audience? Any stories about particular reactions from people who saw it at places like Tribeca or other festivals?

Marshall: It definitely sneaks up on people because the first scene is funny and light, and then it slowly turns heavier. That’s always been something I try to do in my documentaries – hook people with humor and action and then begin peeling back layers to surprise and complicate their expectations.

With this film, it’s nice to sit in the back of the theaters and listen to audiences – to hear laughs and then, gradually, for the room to get quieter and quieter as people figure out what’s going on. You can usually hear some people getting it sooner than others, but by the end, the noisy room becomes completely silent for the long drawn-out shots at the end where Alli is just breathing softly and watching.

You can watch “The Neighbors’ Window” for free right now.