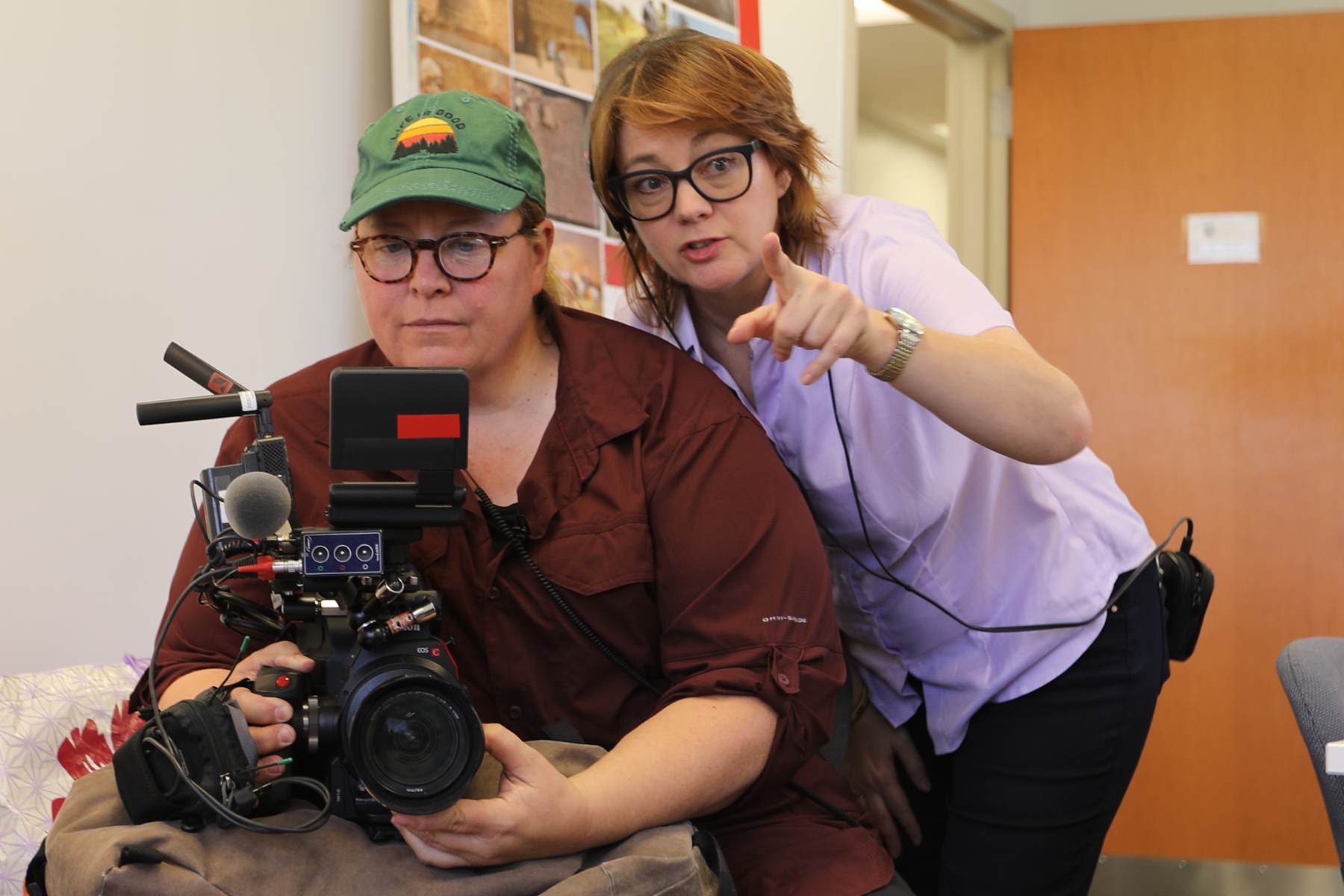 With nearly 40 films as a director and 80 production credits to her name, Laura Nix is always working on something. You can find her alternating between feature-length, short and television documentaries, each time exploring a new facet of human life and using the specifics of each medium to her advantage. But film projects, like relationships, take time. In the case of her Oscar-nominated short, “Walk Run Cha-Cha” – a story about Paul and Millie Cao making up for time lost to arduous immigration journeys during the Vietnam War – the idea was literally born out of a friendship.

Laura talks with Miniflix about directing dance scenes, catching the unexpected and reclaiming the positive power of American refugee stories.

Miniflix: Can you talk about the origin of “Walk Run Cha-Cha”?

Laura: I met Paul and Millie at their dance studio. I walked in and there were fifty people dancing the tango in the middle of a work day. So I took dance classes there for a year. During that time, I discovered that most of the teachers are Eastern European professional ballroom dancers and they’re teaching Latin dance to students from the Chinese community. That seemed like an incredible setting to tell a classic American story. So during that year of being a student there, I met Paul and Millie and became friends with them. Eventually I popped the documentary question, “Will you let me film you?”; they said yes.

Miniflix: Did you always know that dancing would be the texture of this film? Did you know right away that this was a central piece of their story and a central part of how you wanted to communicate it?

Laura: To me, the story is both a love story and an immigration story told through dance. Dance is a subject of the film but it’s also a form that’s used to communicate themes about separation and reunion, love and longing. It’s also a story about resilience, marriage and how when you’re middle aged you have to really work at keeping your relationship alive. Dance is the fabric of the film, but the film is about more than dance.

Miniflix: You choose a very unique approach to capturing what would traditionally be understood as “talking head” footage. You overlay their responses over very off-the-cuff and humorous moments of characters pointing, cleaning glasses, etc. What is it about capturing the mundane yet spontaneous moments that allured you? Did you know going in that you wanted to introduce your main subjects this way?

Laura: It took a very long time to be able to talk to Paul and Millie about more personal aspects of their history. They’re very comfortable with me filming them dancing because they’re performers and they like to be documented. They are less comfortable sharing personal details about their life – especially about their romance. Because I knew them for so long, I waited a long time until I asked certain questions. It became apparent that it would be difficult to have those conversations on camera.

So I did about 14 hours of audio interviews with the couple, and I always did them separately so they would feel comfortable talking to me and didn’t feel rushed…I also filmed portrait shots of them. We filmed close ups of their faces looking directly into the camera so you could look into their eyes and connect with them. Instead of turning the camera off between shots, I let it roll to capture interstitial moments we could use. I like to let the camera roll when filming on-camera interviews or portraits to see what we can find.

And then it was in the edit room with my editor [Paul Alexander Juutilainen] that we discovered intercutting those audio interviews with the portrait shots and interstitial moments. It created an interesting mix where you’re listening to the story and looking at their faces while imagining what they’re speaking about…it opens up the ability for the audience to think or dream beyond the frame. 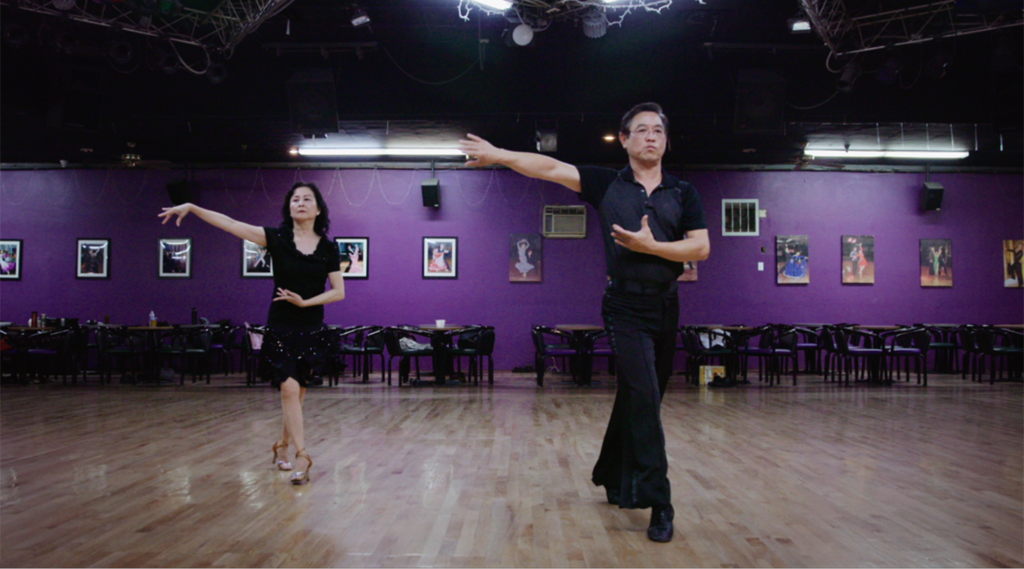 Paul and Millie Cao practicing in their favorite dance studio.

Miniflix: Ending with the full performance of their dance routine was a perfect touch. What was the camera coverage and shooting like for this? Did it feel like a high pressure situation? Did they have to rehearse with the camera?

Laura: I really had to know the dance routine inside and out so I could shoot it. I did a great deal of preparation before the shoot day, where I diagrammed the whole routine and I figured out all the different camera angles I wanted to shoot. Then I drew those diagrams for the DP so we could figure out a lighting plan, as well as the way we wanted the camera to move in relation to the dancers.

We knew early on we needed to use Steadicam to be able to film the final dance. We only had one camera and we did multiple takes. Paul and Millie are incredible dancers but they’re not professional dancers. They’re also a bit older, so we needed to put in a lot of breaks and make sure they had time to rest in between takes. We did the whole shoot in one day; it was all we could afford on the sound stage. We started early to light the stage, then we shot the whole sequence and had just enough time to wrap out. We made it within minutes.

I think Paul and Millie were surprised when they first walked into the sound stage and realized that this was real and all set up for them. They were so surprised to see the entire apparatus being set up just to film them.

Laura: When I was figuring out how to tell the story about Paul and Millie, it was really important to me to figure out the correct balance between their present story and their backstory. Oftentimes for refugee and immigrant stories, there is a focus on the moment when people come into the country, when they’re at their most vulnerable. I wanted to make sure that part of their story was included, but I didn’t want to spend too much time on it. I didn’t want to define Paul and Millie through trauma.

In our audio interviews, I learned about what happened when Paul and Millie fled Vietnam. They both almost died when they left. Their journey as refugees is a defining moment in their lives, but I wanted to focus on what happened after they came to the country and rebuilt their lives from scratch. Especially while we’re living in a time of heightened anti-immigration hysteria and distrust towards refugees.

Paul and Millie have lived in the U.S. for forty years.They started with very little, but they’ve built a life and their family here. Now they are claiming this moment to do something for themselves –  dancing – to make up for the time they lost during their youth when they were separated during the war. I really wanted to celebrate that part of their story since it reflects another reality of immigration which we don’t often see in film.

Thanks to the New York Times Op-Ed Docs, you can watch the entirety of “Walk Run Cha-Cha” for free right now.