Opening Both Eyes – A USC Miniflix Interview With Even Wu 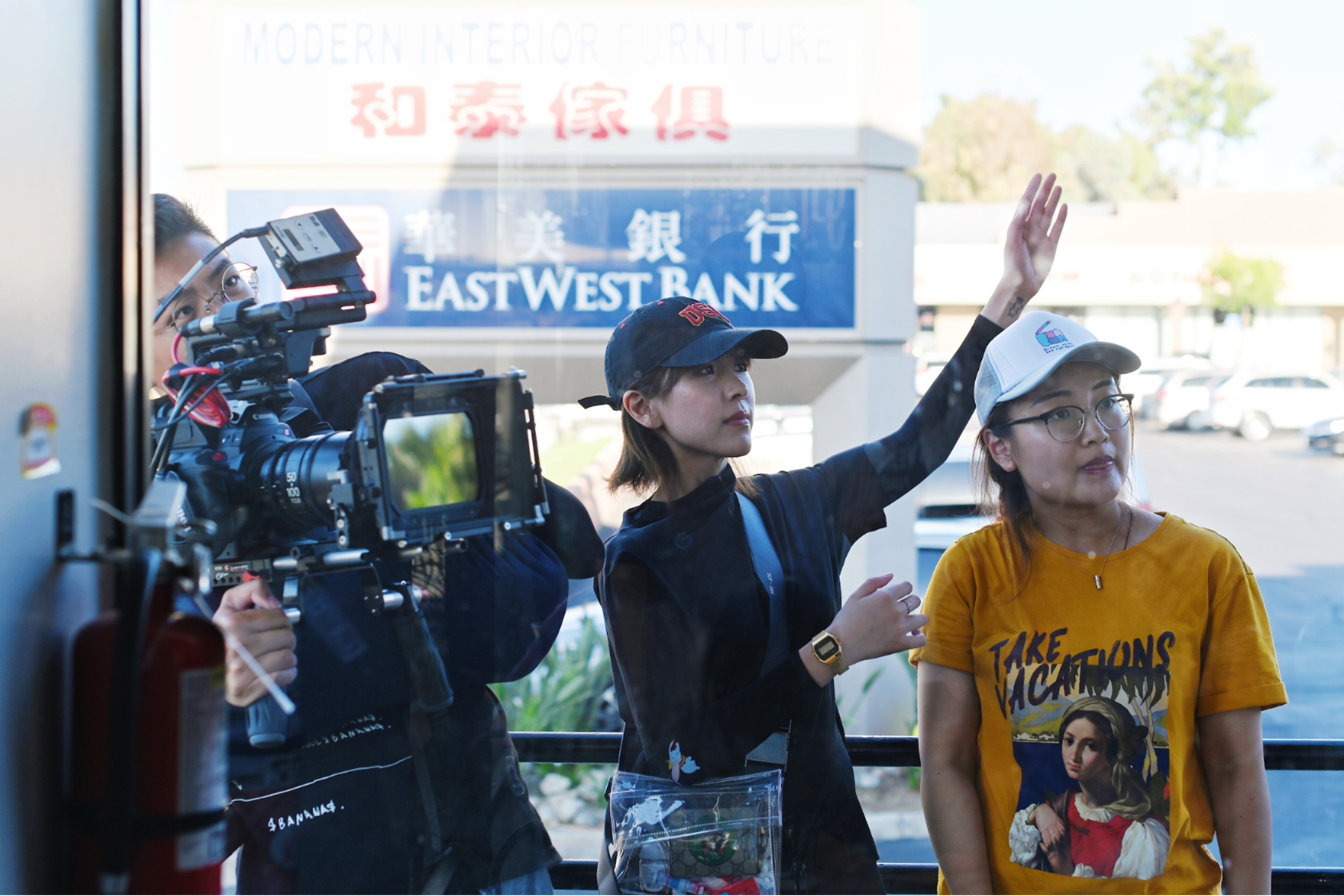 Opening Both Eyes – A USC Miniflix Interview With Even Wu

Even Wu knew she wanted to make films since she was little. At age seven she saw Titanic for the first time in theaters. It blew her away and she couldn’t believe how such an amazing spectacle could also look so real. That’s when she decided that she would work in the “magic factory” that is filmmaking for her career. She went from China to Toronto to complete her undergraduate education. She made many experimental films there but wanted training in making films that were more narrative based. That’s when she decided to apply to USC. Not only was it her top choice, but it would put her in Southern California, just where she wanted to be.

We talk with Even about her time at USC, the making of her advanced project “Dream With One Eye Open”, an impressionistic portrait of an autistic girl who creates an artistic world populated with one-eyed characters through whom she expresses her joys and her tears.

Miniflix: What’s been one thing at USC that has helped you most in becoming a filmmaker?

Even Wu: I would definitely say the connections and relationships. Filmmaking, and the film industry, is all about connections. What I like about USC is the freedom that you have. I know that at some other film schools in Los Angeles, if you are on the directing track for example, then you are allowed to only make one film each semester. But at USC, over the last three years we’ve pretty much been on set every weekend. On those shoots, we’re each taking on different roles.

I know that I mostly direct but I also do producing, editing and more. So many projects are going on and trying on those different roles really helps you to become a better storyteller.

Miniflix: From your Vimeo page, I can see that you’ve made many different kinds of short films. You’ve made narrative shorts, documentary shorts, music videos and commercials. What inspires you to take on these different approaches to filmmaking? Do you have a favorite genre or mode of film?

Even: I made my very first documentary back in 2016 and it was in China. I’d never made a film in China before. It really opened my mind up to a brand new world. Before that, I only thought that I was going to make narratives. I didn’t even know how to begin a documentary. But after that first documentary, it got me into all kinds of film festivals, including Venice.

As a filmmaker, we really shouldn’t restrain ourselves to one genre, especially as a filmmaker still growing up and learning. I just think that documentary filmmaking will actually help me to become a better narrative filmmaker because it really forces me to listen up and be true to myself and other people. It makes me really pay attention to everything that’s happening in this world.

I think I would like to continue making documentaries in between my narrative films. But I really do think that making a documentary is like dating or being in a relationship – you have to wait for the right timing. You have to really be inspired by the person you’re filming, because you will have to follow this person for a year or two and gather all this footage.

Miniflix: How did you come to know Sylvia, the subject of your thesis film “Dream With One Eye Open”, as well as her family?

Even: I got to know Sylvia’s mom, Katherine, first. Katherine is a screenwriter. There was an opportunity there because she had written a feature film and then I got lined up with her by a producer I work with in China. The producer had told me to meet with her in LA to talk about this feature film script. So we sat down in a cafe and then during the meeting a book dropped out of Katherine’s bag and there was this one-eyed painting on the cover.

It instantly grabbed my attention. I asked her who drew this, because I found it so fascinating and so weird, in a good way. She told me that it was made by her daughter, Sylvia. Then I asked about Sylvia and she told me about her disability and also about her gift in terms of art. I immediately realized that this would be such a good subject.

Katherine was so open to having Sylvia’s story told through film. So I went to their house, and I can remember that as soon as I opened the door, Sylvia came up to me. She didn’t say anything but she walked up close and started to look at my eye for a very long time. It felt like the rest of the world just disappeared. It was like she was looking into my soul.

Miniflix: Was there anything about the production of this film that felt most challenging? If so, how did you overcome it?

Even: Due to her disability, Sylvia was unpredictable. You cannot control her or plan anything like a shooting schedule. She can wake up on a given day and have intense mood swings. Sometimes she is super happy or sometimes she is super sad and she just can’t do anything. So that is the biggest challenge. But at the same time this was the biggest surprise for us, because no one can expect what kind of language she will say or what kind of movement she will make.

I also think that that’s the perk of the filmmaking, because we got so many good surprises from Sylvia. One of the most moving moments that the entire crew experienced came from Sylvia herself. Throughout almost our whole production, she only opened one eye. She was afraid to open both eyes due to the environment and the trauma she experienced with her father.

But on the very last shooting day, we set up a big canvas for the whole family to paint together because they are all artists but they never had a chance to create a big canvas. We set it up on a rooftop in downtown Los Angeles, because Sylvia loves the downtown buildings so much. They arrived late because they lived far away and Sylvia was not in a good mood at all. This made all of us so nervous, because the sun was going down and we only had like ten minutes and the sun would be gone.

But as soon as Sylvia got on the rooftop, she saw the beauty, saw the canvas and all the painting supplies and became so happy that she opened both eyes. It surprised us and the family. We captured the moment and it became the very last scene in the film, a truly happy ending. 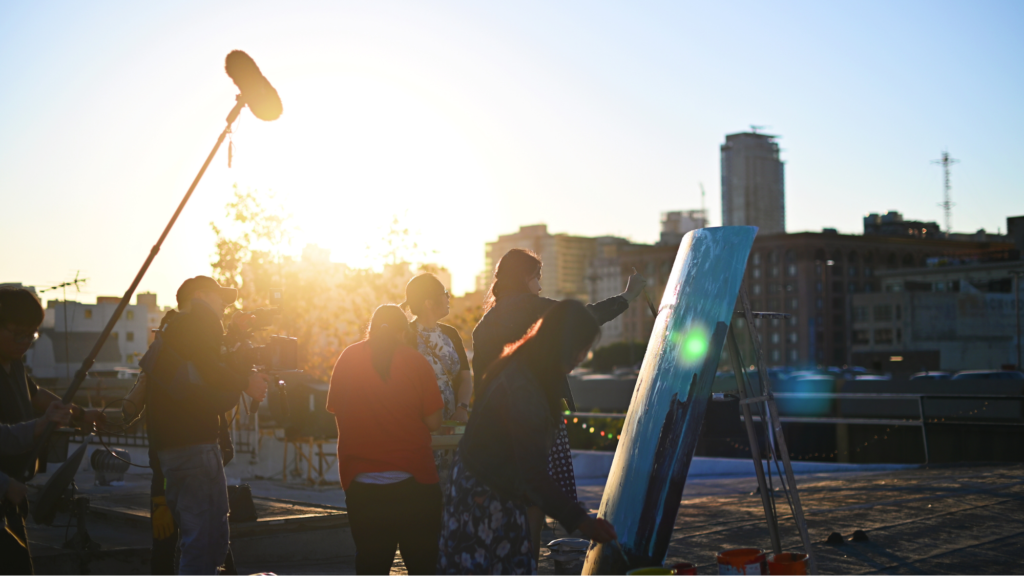 The last day of shooting, as Sylvia and her family paint a large canvas of downtown Los Angeles.

Miniflix: I can imagine that it had to be tricky to figure out how to capture the empty elephant in the room – Sylvia’s abusive father. How did you finally come to the conclusion to include impressionistic filmmaking techniques and to shoot a fictional recreation of the traumatic past events?

Even: That was a big struggle for everyone, including the professors. We kept wondering whether we should mention the father or not. But I think the family really helped because they were so open to exploring it. They thought that telling us about the traumas was actually a way to release. They had been holding back for so many years. We dealt with it in a gentle way I would say. Not so straightforward but instead with image and nightmare sequences to show the trauma and pain. I think it was more effective to express it in a more cinematic way. Then I definitely got the agreement with the family on what to show and what not to. They were all happy with the material.

Miniflix: What’s your hope for “Dream With One Eye Open” in terms of its life after First Look fest?

Even: I’m very confident in the film. It’s definitely one of the best ones that I’ve made so far. It’s also a very universal story and is suitable for any age, nationality or gender. Anyone can watch it and get inspired and moved by it.