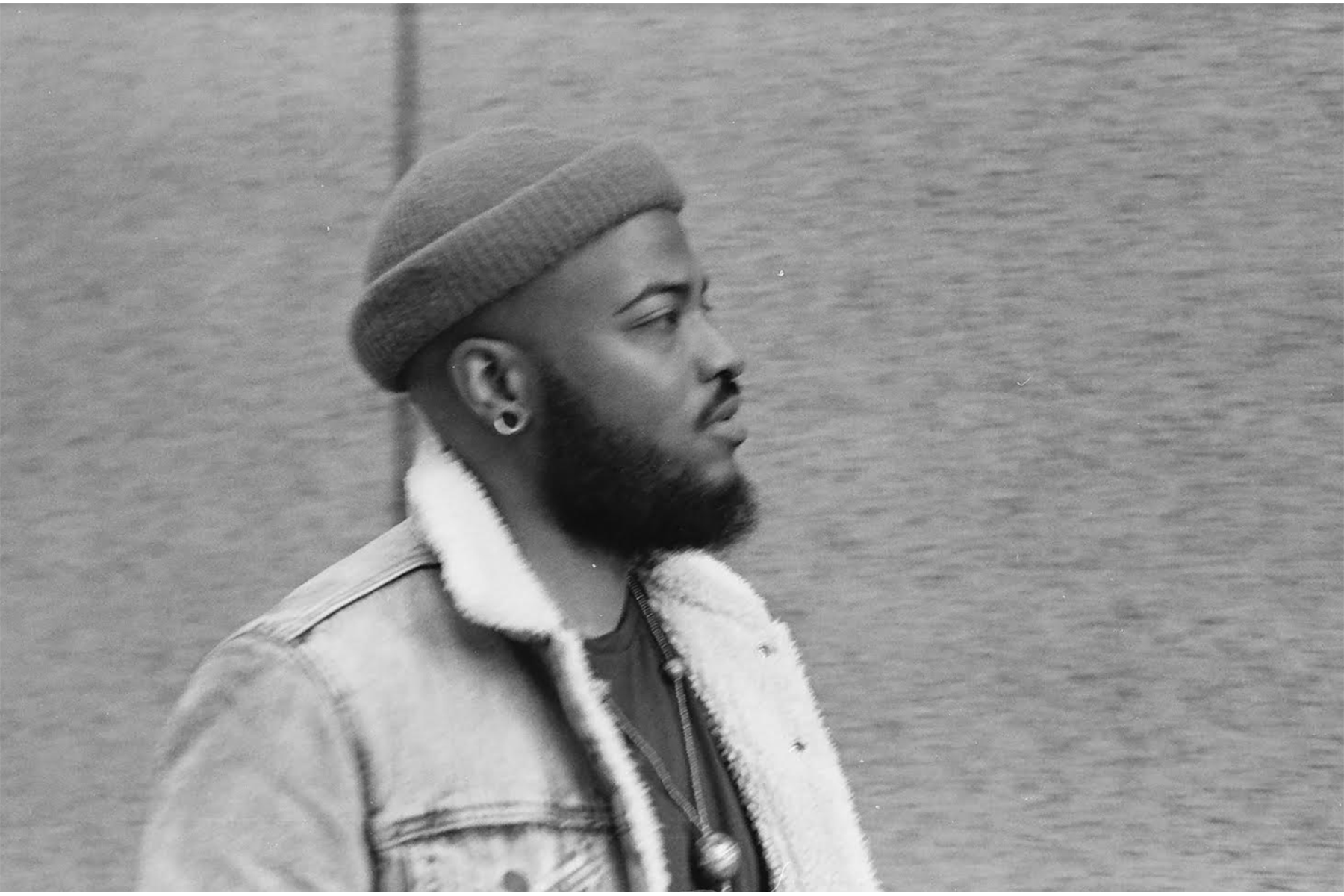 Interrogating Your Art: A Miniflix Interview With Darol Olu Kae

Interrogating Your Art: A Miniflix Interview With Darol Olu Kae

Darol Olu Kae’s journey to film-making was anything but traditional. He started in an academic setting tangentially related to film, attending two different PhD programs as a graduate student (Visual Studies at University of California-Irvine and Cinema & Media Studies at University of Southern California). His studies were always in relationship with the production side and he was always creating work with friends when he wasn’t in school.

But two defining moments helped set up Darol’s future as a multimedia artist and deep-thinking filmmaker. The first came when he started working with Kahlil Joseph on BLKNWS, a two-channel video broadcast that blurs the lines between art, journalism, entrepreneurship, and cultural critique. BLKNWS was included in the 58th Venice Biennale in 2019 and the 2020 Sundance Film Festival as part of the New Frontiers Program. Kahlil Joseph had discovered Darol’s work first through his Instagram account, where, inspired by Arthur Jafa, he was working through “collision editing” – juxtaposing one visual idea against another to create a narrative or third meaning.

The second moment came in working with AG Rojas, a well-established music director, on a Smithsonian-commissioned short called “Godchild”. The piece proved fundamental to Kae’s continued growth as a filmmaker. Working on this short also cemented Kae’s transition from a life defined by academic research and study to a life no longer limited by pen and paper.

Now he has a short piece of his own – “i ran from it and was still in it”. Part autobiography, part visual-aural collage, this thoughtful and moving work has been officially selected by the Locarno Film Festival. Darol Olu Kae talks with us about the making of this short film, the personal background to its story and what he’s looking forward to next.

Miniflix Interviewer: As someone who’s been on the outside looking in at a major film school like USC, what would you say to aspiring filmmakers about going to film school? Does the traditional university model still make sense for today?

Darol Olu Kae: I think about it the same way as I do the university in general. It depends on the person. However you engage with it, I think that it should always be critical. I don’t want to say don’t go. I had to leave for my own reasons; I needed work that sustained me…I basically stole what I needed and once I was ready to go, I left.

I knew that at the end of my journey, it wasn’t about teaching at a Research I institution. But I knew that this was a space that I could devote to thinking for a good amount of time. It gave me the respite I needed to learn and study. So often life moves at a pace that isn’t conducive to study. But the university also has its own history, its own power dynamics…

….I think it depends on the person. But for me, it’s always important to interrogate the mechanisms of filmmaking. It’s not something I wholeheartedly accept. I hold a complicated relationship to the medium. I don’t subscribe to being a cinephile. My relationship to the medium itself is fraught with a history of brutality and misrepresentation. And I think this is the sort of relationship we should have with an institution. We should always be bending it to our desired aim.

Miniflix: What was the kernel of the idea that led to “i ran from it and was still in it”?

Darol: So the title itself is borrowed from a book of poetry by poet and philosopher Fred Moten. It’s something that I’ve been sitting with. But the work itself is about the intertwining and complicated relationship between loss and creation. But also it’s about how certain histories are transmitted through generations and how some of those histories are out of reach.

It’s really about the impossibility of memory. What brought the film into sharper focus for me was doing a residency at the Echo Park Film Center. I was going to make an archival project and a purely original piece. I just didn’t have the time to put together the latter.

But I decided that, for the time being, I wanted a piece that I could put out into the world that was under my name and could function as a pivot point to my future projects. So I wanted to have “i ran from it and was still in it” in the world before I moved on. 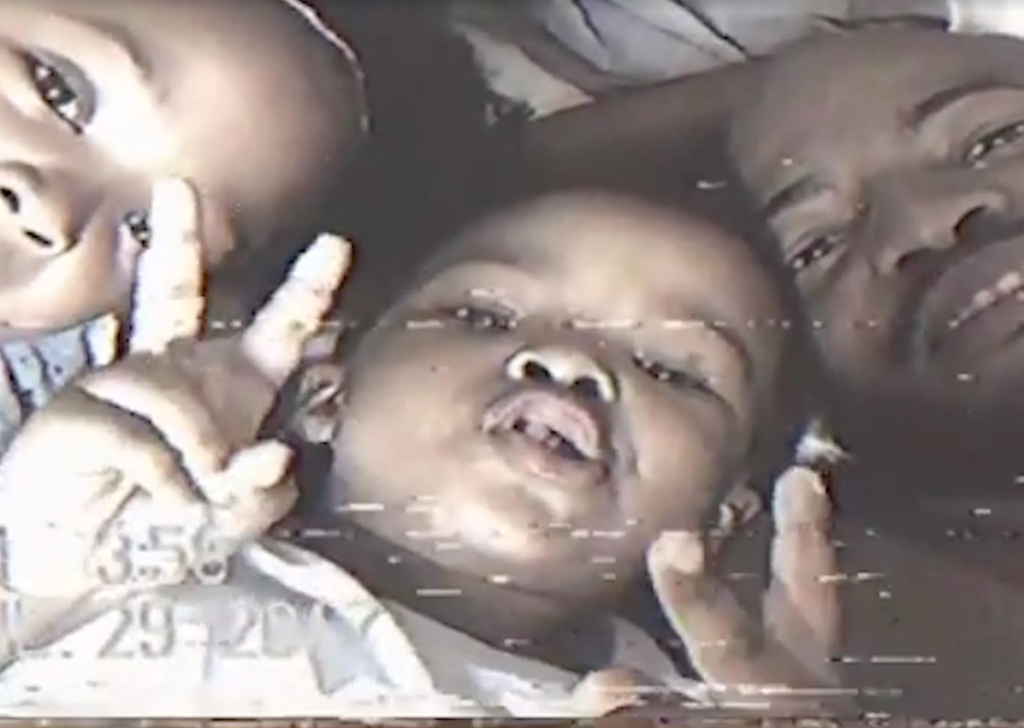 Still from “I ran from it and was still in it”

Miniflix: What do you believe sets this film apart from the collaborative work you’d done before it? How does this film represent you as a distinctive filmmaker and voice?

Darol: In preparing to make this film, I really had to figure that out for myself. The conclusion I came to was that I’m coming at my material from a microscopic point of view, while the previous work I’d been doing with others was more interested in macro ideas and broad moments.

For me, my lane was this intimate sharing of myself at a very personal level. I think there’s a texture to the work that feels specific and nuanced, but at the same time feels very general and broad. It’s so personal that it ends up being collective and universal.

I use a lot of the techniques that I learned from previous work but I also made a concerted effort to use a level of depth that helped me define my language.

Miniflix: How does one start putting together a project like this, that pulls from so many references and archival footage? Did you know what you wanted to draw from before getting started or was it a more organic process?

Darol: It’s a mix. Because I have been working with archives, these things have been alive in my subconscious. Some of what I found already existed on my IG page. Even the intro of the film is in Arthur Jafa’s Love Is The Message – not that particular moment, but the scene is. I wasn’t even actively aware of that at the time.

But the idea that propelled the work allowed me to develop an organic process. I didn’t write anything down and didn’t know it was going to be about loss and grief and fatherhood. None of that had been articulated yet.

But I worked from that initial moment in the film. You start with a couple, right? Then you see the child. Then you hear James Baldwin talk about the relationship between experience and culture. In particular, how black folks can’t get away from the world. How the world embeds itself in everything we do. How our experience is at a level of total action and that’s expressed through many different cultural means – through dance, through food, through our relationship to one another.

As a society, we’re used to black culture being expressed through dance, but for me this project became intensely interested in figuring out if this idea could be transmitted and transmuted through cinema itself. It was really just an exercise, through a juxtaposition of images and sound.

Miniflix: You could say that there are many different movements and moving parts to the film. Did you have an underlying structure in mind when you started?

Darol: I’m a big believer in intuition. What I’m trying to do is conjure the feeling through the images that are in conversation with it. I’m just trying to create an environment that allows both personal and larger collective feelings to flow through me.

The film’s stream-of-consciousness became a way of thinking through difficult questions around generational inheritance. Like, what are the immaterial things that I’ve received from my parents – things that I might not want and be fully aware of – and, in turn, what have I passed down to my children?

Prior to making the film, I had this footage of my children while they were living in the same state as me. But they suddenly left and moved to Philadelphia with their mother. So a month before they left, we recorded all of that home footage.

There’s so many questions about what was passed on from him to me and what that potentially passed on from me to my children. But I worked through it in this stream-of-consciousness way and ended up making the film in like 3 days. And I’ve since refined it and made a few different iterations to get it to what is screening at Locarno. 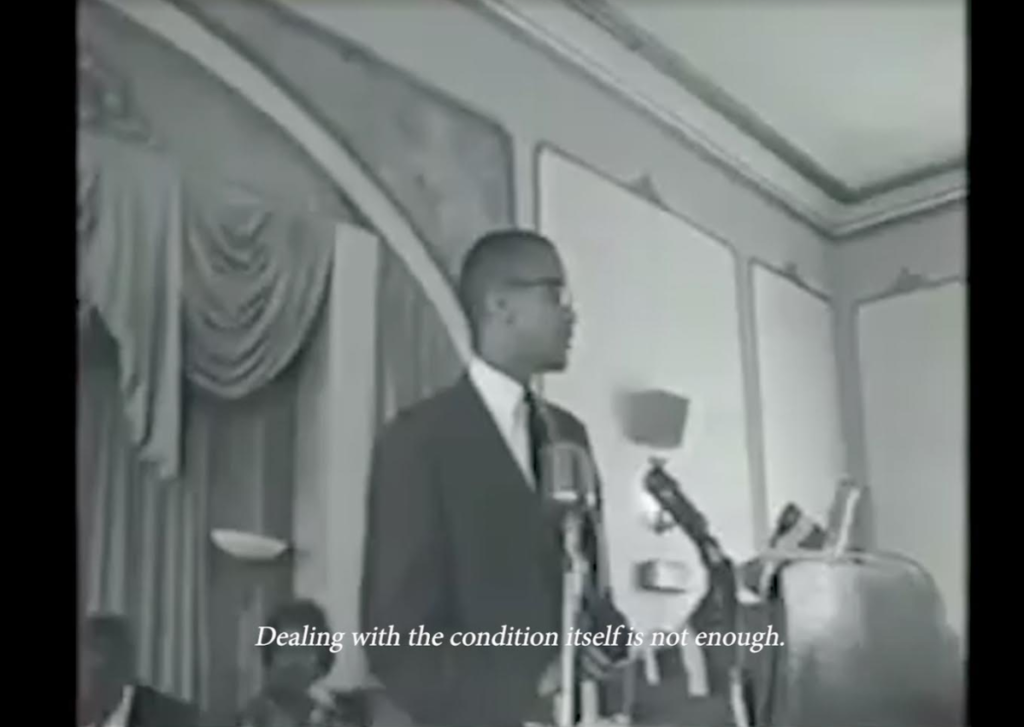 Miniflix: You use a clip of Malcolm X, almost as a sharp interruption to the flow of the film, to remind us that “we have to go to the root. We have to go to the cause. Dealing with the condition is not enough.” Do you think this film is attempting to “go to the root” and if so, how? Other than a way to use “Passionate expression” to deal with personal loss in your life, do you think this film has other political or cultural implications?

Darol: Yes, this section is meant to be an interruption. So much of what’s happening before is vibey, though not in a bad way. It lulls you and makes you comfortable. But this moment [with Malcolm X] was to me the center of the work. It’s the core. One reason for that is that it’s in Los Angeles. That’s where he gave this speech. I’m born and raised here and so I wanted to mark that. But more importantly it shifts the course of the film and turns it towards a deep interiority which moves from the personal to generational consciousness.  It shifts from my own personal grappling with filiation to something beyond me, something that’s greater than myself. It’s important to note that we have to go to the root, to the cause. That’s the way of moving this film towards a more generational concern, about my father, about his father and so on.  I’d say that the first half is defined by loss and family and the black experience, as well as the idea that family can be ripped from you. But the Malcolm X clip marks the turn from loss to memory in very explicit terms.

Miniflix: What are you working on next?

Darol: I’m currently in pre-production for my next film KEEPING TIME so that occupies a lot of my time and energies. I’m excited about how it’s unfolding. There are actually seeds of the film in my previous work. I’m also preparing for an upcoming residency at BAMPFA (University of California, Berkeley Art Museum & Pacific Film Archive) through an event series called Black Life where I’ll be making some new work and expanding on the ideas, histories, and feelings that prompted “I ran from it…” Additionally, I’m juggling a couple collaborative projects that are incredibly exciting and generative for thinking. You can watch the trailer for “i ran from it and was still in it.” You can also check out Darol’s incredible Instagram.  *Cover Picture by Russell Hamilton.*
Love1192
0
Love1192 Share Tweet Share