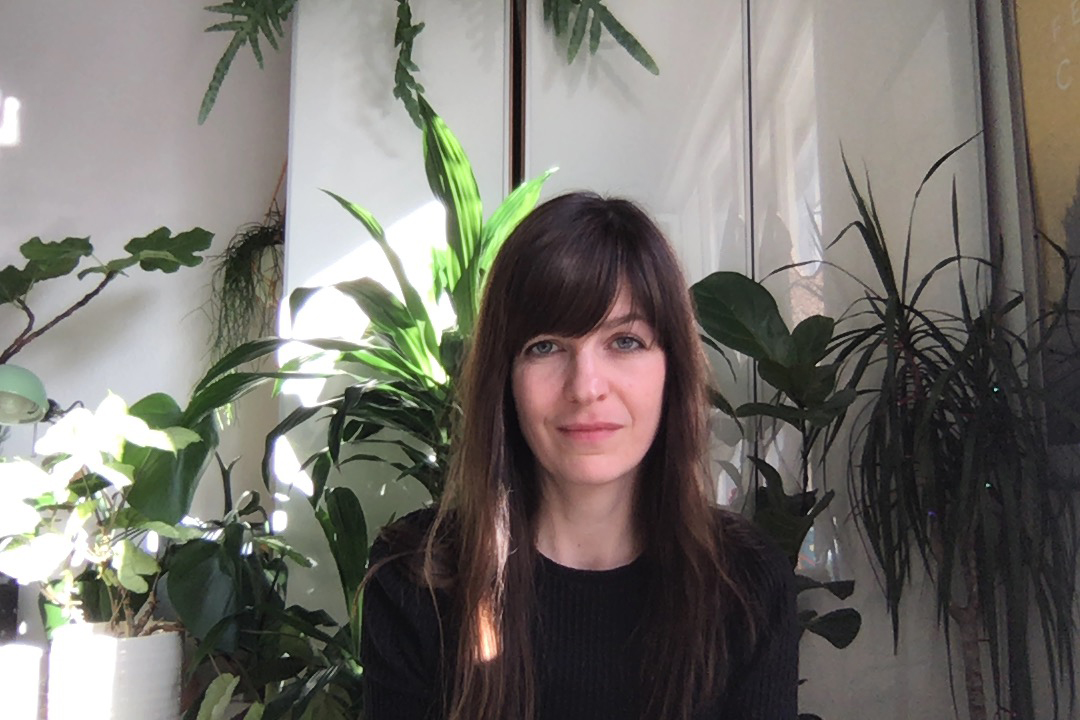 Finding Solidarity Through Filmmaking – A Miniflix Interview With Nadja Andrasev

Finding Solidarity Through Filmmaking – A Miniflix Interview With Nadja Andrasev

Even though the animated short “Symbiosis” had been playing at festivals since June of 2019, Hungarian director Nadja Andrasev was really excited about, and greatly anticipating, the SXSW screening. This was a chance for her first professional film to land at a major U.S. festival. Nadja has been very familiar with the world of filmmaking before she started doing animation, having been a 2nd Assistant Director on various live-action projects (including The Duke of Burgundy) for many years. At 30 though, she pivoted over to animation, studying at MOME in Hungary.

Her graduation short, “The Noise of Licking” found some acclaim, including a Vimeo Staff Pick. From there, she got to work on her first post-university project: “Symbiosis” This French-Hungarian co-production follows a woman who collects objects from other women her husband is having affairs with. It played at several festivals and continued her momentum as an internationally-recognized filmmaker.

However, once the coronavirus pandemic hit and SXSW announced its cancellation, her film’s momentum took a temporary setback. But when Mailchimp and SXSW offered to partner up and release the selected short films, Nadja, along with her producers and distributors, decided to release it that way rather than wait another year for an online release (“Symbiosis” and many other SXSW shorts are now available to stream – see link at bottom of article).

Despite these setbacks and overall crazy times, Miniflix talked with Nadja about what it was like to screen her film (when we could still hold festivals), the process of making “Symbiosis” and why this one was so personal.

Miniflix Interviewer: Since your first career was as a second assistant director, do you find that there was anything about that job that helped prepare you to direct “The Noise of Licking” and “Symbiosis”?

Nadja Andrasev: Yes, I think it both helped me and provided a little bit of a setback. I think very much like a live action director. For example, the shots in my films are not so morphed and do not use animation techniques as much as my classmates. I still think in terms of close ups and wide shots and things like that…for “Symbiosis” there was actually a live action shoot. Since it was a very small crew, I was my own assistant director for the filming of these shots and had to think like an AD while also being the director. 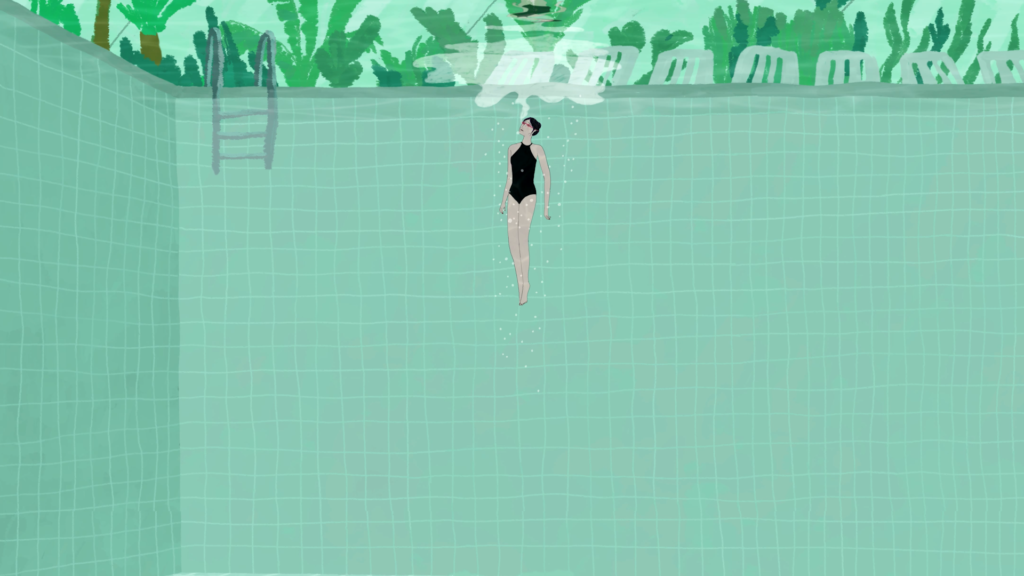 Nadja: I have some stop-motion background, because at the university I did more stop-motion animation than digital, mostly in a team with my classmate, Milán Kopasz. This film is about a collection and the main character is collecting things, her mind being the place where she keeps some, as memories. Touch and smells in particular are very important for her. So I figured that this was the perfect opportunity to use elements like stop-motion and collage, and work with Milán once again. In particular, for the insects I was inspired by the film The Duke of Burgundy that I worked on as 2nd AD, because I had met an insect supervisor there. So I knew that one day I wanted to shoot with insects and I called him up a few years later and he took this job for me.

Miniflix: How do you approach screenwriting for these animated shorts? They are not traditional narratives and are often carried by sense impressions or memories. Do you write out a full story and work from there, or do you play around with ideas first?

Nadja: For “Symbiosis”, I did work on a screenplay. At the beginning, it was difficult because it was too linear and was too long. The original idea that a woman is collecting other women – the logline – is interesting, but to make a complete film from it was very difficult. It could have gone so many different ways. I had a script editor at MOME who became my co-writer [Rita Domonyi].

First, I wrote down and collected many different ideas. From there, we started piecing it together, like a mosaic. But it was very important to draw at the same time, because, for example, the sushi and mirror sequence came from an early storyboard. Since it was a visual idea, I couldn’t really write it down. I mean I could, but I was constantly thinking visually.

For animation directors it’s very good to work with a script and a storyboard in parallel.

Miniflix: What was the inspiration for that logline? The idea of a woman becoming curious about the other women having an affair with her husband, rather than being angry or jealous, was so fascinating to me.

Nadja: The first time I thought about this idea was when I was at a party and about six or seven women that I used to be jealous of, or had some issue with, were there. I thought about them at first in an ironic, negative way – a collection of monsters. I fantasized about bizarre, insect-like women pinned to a board. It was very dark and cynical and I’m happy that I didn’t make the film then.

Over the years, I came to a much different acceptance of the fact that even if you are not with a person anymore, what’s left is this kind of voyeuristic admiration for their  lovers. I think this happens because they used to be on your mind all of the time, causing anxiety, insecurity and constant comparisons with yourself. I realized that a few years later you can still have this weird collection of people who are in your life, even if you did not choose them.

I grew to have a much more positive view on this particular phenomenon, especially as I became friends with some of these people over the years. A solidarity formed with other women. I wanted to show this progression in the film – from jealousy, where the wife tries to control her situation and the mistresses, to a place of distance, where she finds greater control over her life. Eventually she finds herself more interested in collecting memories of her past than in staying angry or hurt. These things can change and you can begin to ‘tame’ your monsters. Things are not always so black and white. 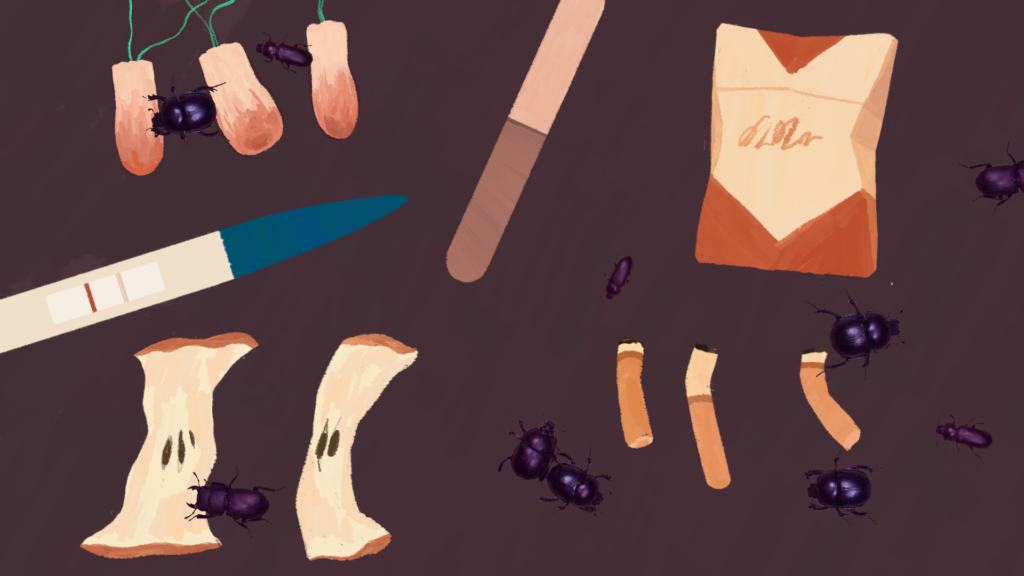 Miniflix: Can you talk about your collaboration with the sound designer? Sound effects are a big part of both your short films, and I’d love to know the behind-the-scenes of that process.

Nadja: For both of my films, I worked with the same sound designer – Péter Benjámin Lukács. He actually taught at my university and was one of my instructors. He has worked on many live action and animated films. For animation, you need a very creative sound designer and I trust him completely.

For my first film, “The Noise of Licking,” I had to create my own sound first in a sort of initial draft. Péter wasn’t involved in the project at that point yet. But when we started having conversations about the film, it was amazing to discuss the dramaturgy! And the end result was so much better than I imagined.

So when it came to “Symbiosis”, I wanted him to be the sound designer as well. We started with discussions about the dramaturgy again and had to make decisions about when we were heightening emotions and then cutting them off. Both films ended up working like this. It was about getting into some kind of mood and then suddenly changing to a completely different thing. Sometimes we did wonder how the audience would feel about this, but I think it came together organically because of the images.

As I was making the storyboard, I was thinking about how it would all relate to each other…it was good to think of everything acoustically and try to emphasize the sound.

I’m really impressed with Péter’s work, as it adds so much to the film.

Miniflix: Since your film had a chance to screen at several festivals before the coronavirus hit, can you talk about any of your favorite or most surprising reactions that came from a particular screening?

Nadja: I’m always a little bit nervous about showing this film when I’m in attendance. It feels like standing on stage naked, because it’s very personal. I was really interested, though, to see people’s reactions. At our first screening at Annecy [International Animated Film Festival], it was a huge room of people but no sounds were made during the film. It made me very terrified that people didn’t like it.

Then there are times, like at the Angers Premiers Plans Film Festival, which was also a very large crowd. But this time I could feel the whole room just getting really hyped-up. Particularly after the first sexual scene, they started making weird sounds. They seemed to be surprised and wondering what was happening, but it was really energizing. Sure, they were making noises, but you could feel that they liked it and laughed a lot. I do find that there are some funny moments in my film, even if they are not obvious. In this Angers screening, there was a big ovation at the end and the film even received the Audience Award for European Short Film. That was amazing, because there were so many people and so many films there. 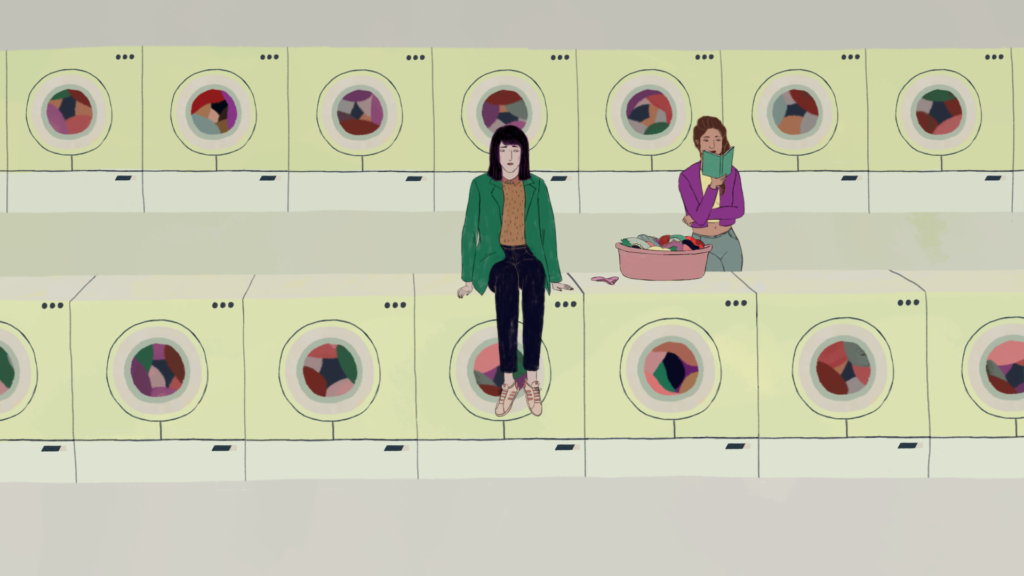 Miniflix: Do you have a favorite short film(s) that you’d like to shout out during this time?

“Symbiosis” was a French/Hungarian co-production between Miyu Productions and Salto Films. It is being distributed by Miyu Distribution.