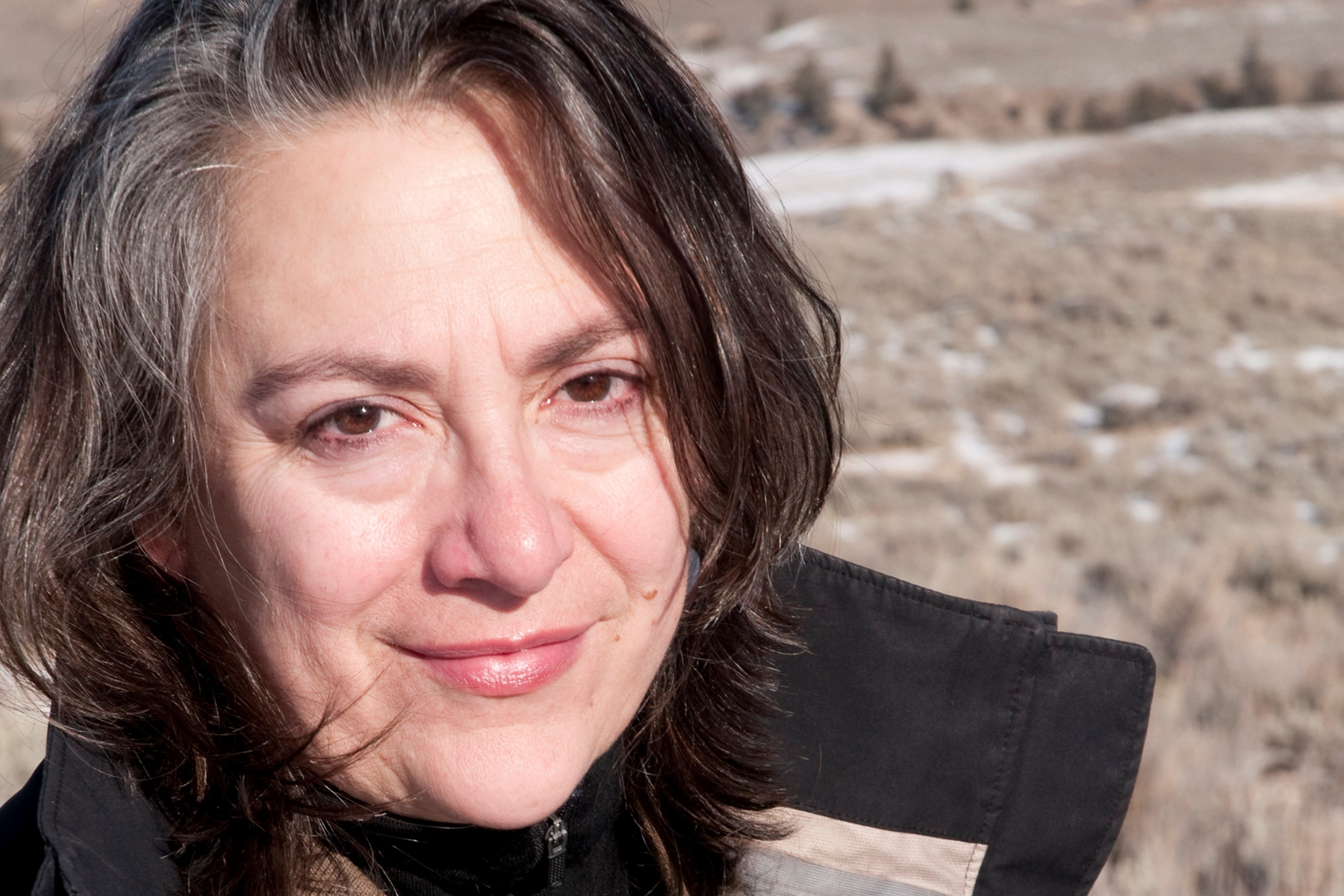 Closing Our Blindspots: A Miniflix Interview With Carol Dysinger

Closing Our Blindspots: A Miniflix Interview With Carol Dysinger

In 1977, Carol Dysinger received the Student Academy Award – her first major filmmaker prize. This helped launch her into a diverse career, which, three decades later, has now resulted in her first Oscar nomination. The nominated film, “Learning to Skateboard in a Warzone (If You’re a Girl)”, follows a group of Afghan girls who come from different parts of their community to meet in Skateistan, an organization that teaches them to read, write and skateboard.

Even though Carol’s been making films in Afghanistan since 2005, “Learning to Skateboard in a Warzone” was in many ways her first opportunity to correct certain Western misperceptions surrounding Middle Eastern womanhood and adolescence. She shares with us why this had to be a short film, the importance of using Afghan crew members and why proof-of-concept films aren’t all they’re cracked up to be.

Miniflix Interviewer: What is the origin story of getting “Learning to Skateboard in a Warzone (If You’re a Girl)” made?

Carol Dysinger: It was a commission where they needed a woman filmmaker who could work in Afghanistan. In those fifteen years [of shooting films in Afghanistan], I’ve constantly been going in and out of the womens’ rooms there, which I could do as a woman. Most other filmmaker-journalists couldn’t. I was always wondering how I could capture the spirit of these girls in a film. When Grain Media called me to do this, I really wanted to do it but I knew it could only be a short film. There was no way that we could, safely – and within a certain budget and schedule – make a film about the home lives of these girls. It’s just too fraught.

But to have them together in a place where they’re doing something that’s clear, where you don’t have to try and get them to talk about their families or their feelings about things, where you just see them behave. That I knew I could do, but only as a short film.

Miniflix: What was it like trying to capture and document a place like Skateistan where so much is going on? How do you keep things natural in the room even though you’re filming these girls?

Carol: I had a lot of Afghan women on my crew, so I brought Zamarin Wahdat, who is a budding cinematographer. She shot a short that’s premiering at Sundance. But I brought her along on this. She’d left Afghanistan at the age of three and had never been back. So this was her first trip back to her own country. I asked her to go find out from these girls what kind of childhood you’d have had if you hadn’t left. Go talk to them. Then I wrote out the interview questions and gave them to her and let her interview them, because I’m an American and also an elder. They behave in front of me.

I also brought in a young Afghan who lives in Afghanistan who’s making films. We trained her to do sound and how to AC on these cameras we had… We had to be strategic. It wasn’t just being a Westerner; it was that these girls would only open up to a big sister. That’s it. And Zamarin very naturally took on that role because she was curious about her childhood. They got very close and I let her be my route to them.

I knew that there were so many stupid assumptions about Afghan female life out there. We have all these random and weird pictures in our head, but they’re not so different than us. Certainly, they aren’t so different than me as a child. It was a similar sort of restriction: don’t run, don’t climb trees, don’t mind him, boys will be boys…. What I love is watching these girls get together (and they’re all from different ethnic groups and different tribes) and making friends outside of their family, which they usually never do. 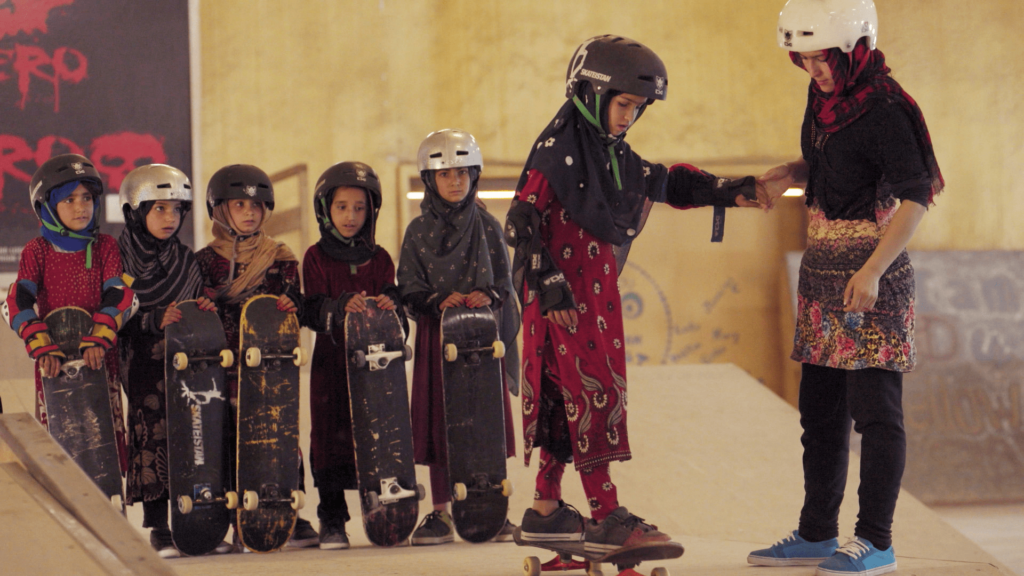 Miniflix: Since you have filmed in Afghanistan for so long and made many different projects about that place before “Learning to Skateboard”, what did you think that this film had to offer in terms of presenting a new perspective or angle you perhaps hadn’t captured before?

Carol: Before, I was very interested in the space between the Western involvement and the Afghans… And because I’ve sat in that liminal space for so long, I know what people from my country think and are wrong about. And I know that I can’t give you an intimate portrait of Afghan society. But I’ve spent so much time closing my own blindspots around the differences between us that I know how to close the audience’s blindspots a little bit too.

Miniflix: Did you always know that the progression or structure of the film would be around the progression of skateboarding lessons these girls received? As the film shows, learning to skateboard has many parallels with growing up and becoming your own person.

Carol: Everyone was pushing for me to get more intimate with them, but I just knew we couldn’t and that I wouldn’t, because it would be false. I think many people wanted some horrible story about female oppression, but what I wanted to do was show that, as a girl growing up, you have to raise your hand. And you’re going to get teased for it and you’re going to be wrong but you have to raise your hand. I was so taken by the teachers who said, “if you don’t know the answer, raise your hand anyway and I’ll teach it to you on the board.” What a brilliant tactic!

Miniflix: There are so many girls with so many stories. When you’re making a documentary, particularly one that is less than feature length, how tough is it to find the stories that you will use for the final cut?

Carol: What I did at the beginning of the shoot was to look for girls who sat together but looked very different. The biggest problem in a world where girls change their dress garbs everyday is that it’s really hard to track a character from one place to another…It was really about being very practical about who we can tell apart. I followed about six and ended up with four in the film. It was about learning about them, trying to figure out whose home we might be able to go to. We only went to two…I didn’t want us to go to the homes of these girls too much, because it creates more problems for them than for us.

So part of the trick was making a skateboard movie where no one can skateboard and where nobody can go outside. That took some thinking. 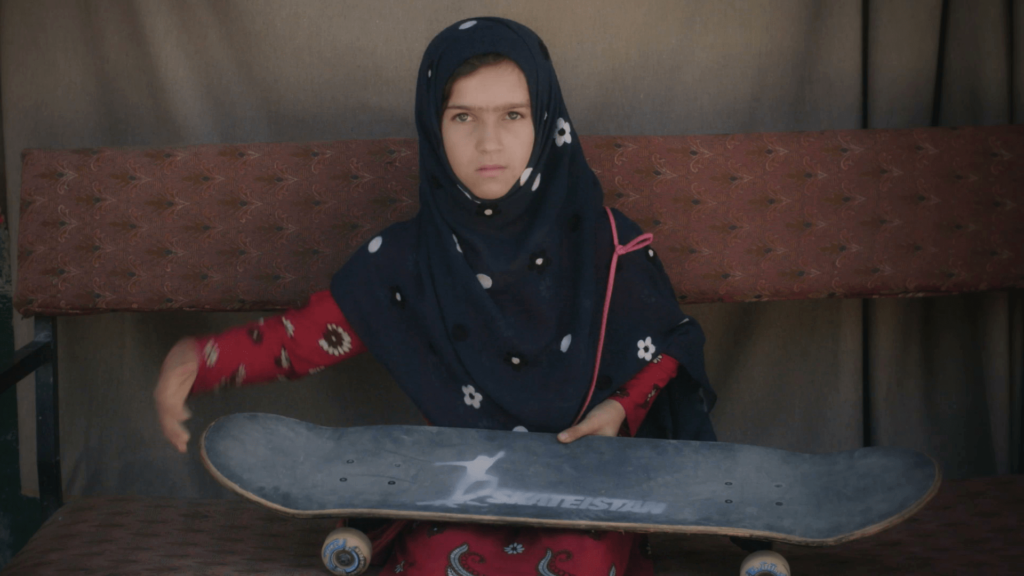 Miniflix: I also wanted to ask about your time teaching at NYU. How do you feel that your years teaching there has informed your own filmmaking?

Carol: In a lot of ways. I mean, you learn how to do something and you do so instinctively. Then you have to stand up in front of people and they start to ask you questions like, “When do you cut to a closeup?”. You have to start thinking through what you’re doing in ways that are more interesting than saying that it feels good.  I have students from all over the world. We have such an international and diverse student body and I’m constantly being confronted with students who have these ideas for films that do not fit into any common Western structure. There is a great joy that comes from being with somebody who has such an original idea and strong voice but no chops. I’m trying to help them without killing what they’ve got, help them figure out a way to manifest that doesn’t cookie cutter it.  The great thing about teaching at an institution like that one is that it’s all about the work. And the work is good. I don’t get duds. We take 36 people out of a thousand and these are smart, imaginative people. You gotta stay on your toes and really keep thinking very sharply. Whenever my confidence lags, I can’t falter in front of these students, especially the women. Because for me, when I started teaching, it was about trying to be what I did not have myself growing up. I’m going to tell these girls the shit I wish I’d known. And the men too. Finally, I work with amazing filmmakers too. You know, Spike Lee is our artistic director. Kasi Lemmons is teaching there. Great editors like John Tintori. There’s Donna Gigliotti as a producer. I have this wonderful faculty. It really keeps you sharp, keeps you talking, keeps you seeing new things you’ve never seen before.

Miniflix: In terms of approach, do you have particular advice that you offer your students when it comes to making a short film and understanding that it’s a different medium than a feature?

Carol: When students say they have a feature script but they want to make a short of it first as a proof-of-concept, I always say you should make it in the world of your feature but don’t make it the story of your feature. If the bad guy has a cat, make your short about the bad guy’s cat. Make it be in the world so that you’re presenting the world you want to show, but forget doing the story or the plot of the feature.  Writing a short film is like writing a short story. The last sentence is your third act. We need to have a moment-to-moment experience that comes to one thing. I’d always say to them that a 12-minute short is like a plank bridge over a creek and a feature is like the Brooklyn Bridge. You need so much structure for a feature. The work is so deep and varied. Everybody needs to learn how hard it is. And I think the best thing to experiment with in shorts is worldbuilding. The look and the casting. To be honest, the people looking for a proof-of-concept film aren’t looking for it in the story; they’re looking for it in your chops. Better five minutes that are dense with fabulousness than twenty two minutes of compressed narrative.
Love1191
0
Love1191 Share Tweet Share