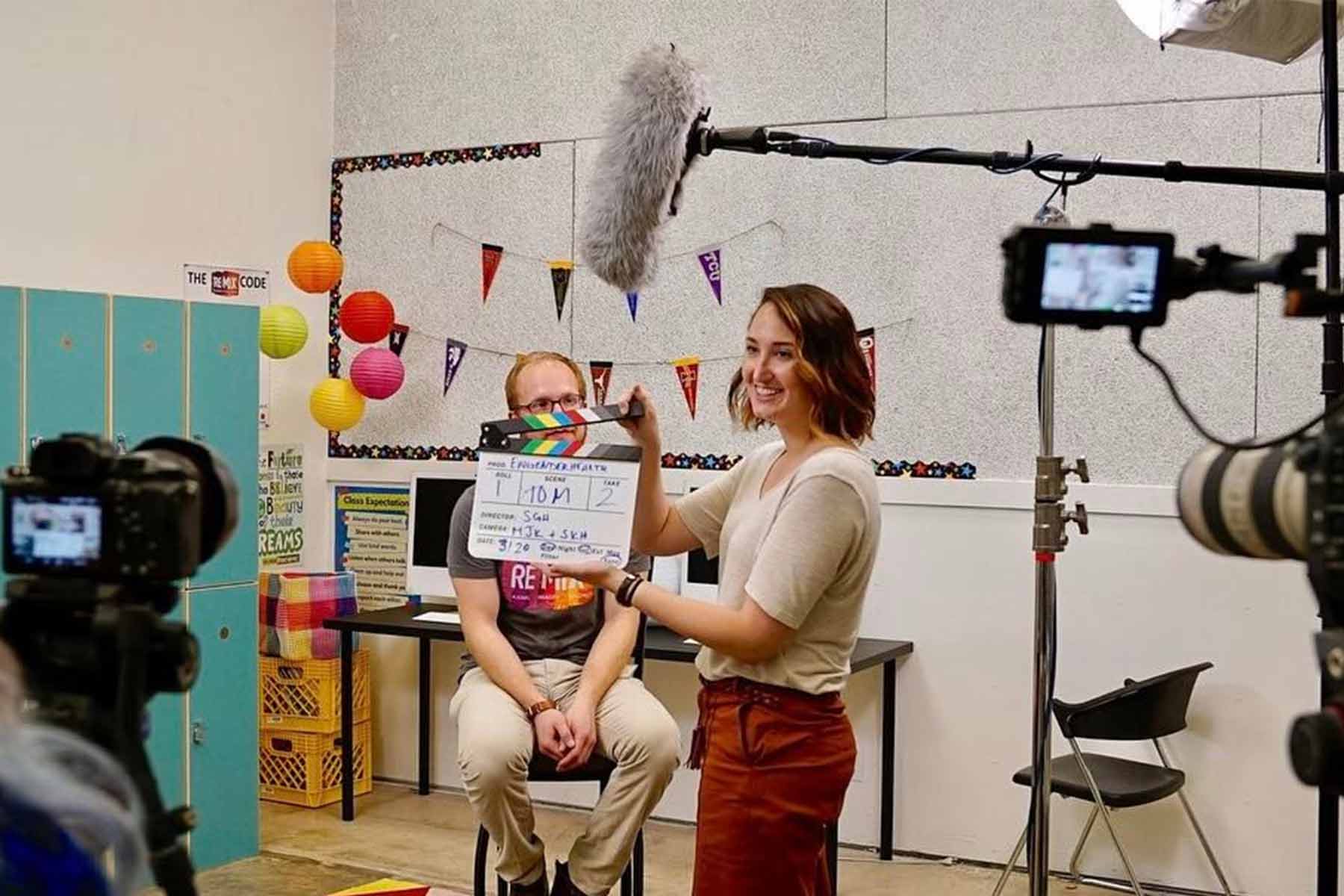 helby Hadden stays busy. When she isn’t writing, directing, and producing a new documentary project, she is teaching film at Texas State University and UT-Austin. She also finds time to volunteer, network, speak at events — and, oh yeah, run her production company. But at the center of it all is a passion to engage with the world around her, and to investigate stories that interest her. They are sometimes specifically about her own life (as in the excellent animated short “Tightly Wound”) but even when they are not, Shelby finds a way to be intrigued and curious.

This is the case with the short documentary “Her & Me”. Though the film is an observation on twins and what their relationships look like at different stages, it also reflects Shelby’s own interests in human nature — particularly in “identity and independence”. With “Her & Me” now playing on Miniflix, we talked to Shelby about the making of the film, what she learned along the way, and what we can expect the future of film education to look like.

Miniflix Interviewer: What was the genesis of “Her & Me”?

Shelby Hadden: For my second year grad school project, I was following a different story that had to do with Texas politics and it got to this point where I knew I couldn’t just make a short film about it; I couldn’t make it within the limitations of school.

That left me scrambling to find another project, and I came across the story about Allie and Gabby [the main subjects of “Her & Me”] in our school newspaper, “The Daily Texan”. In there are these beautiful photos of the two of them and they are just so identical and so symmetrical…visually, very striking. And my grandfather who had passed away earlier that year at 99, was also an identical twin… In his later years, as he was declining in health, he would constantly talk to my grandmother about his twin.

So I think that, combined with seeing Allie and Gabby and needing a story, I knew there was something here to be said about identity and independence. 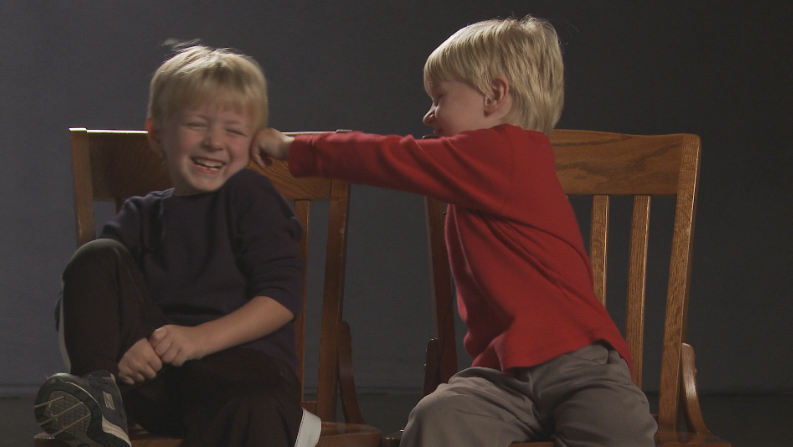 Miniflix: What fascinated you most about twins? Was there a particular question you were looking to get answered, or something you were trying to discover?

Shelby: I was fascinated by their dynamic and was wondering what that’d be like to literally do everything together with someone and never have alone time… But I was also wondering how they were planning for the future…

Other than their twin-ness, they’re smart and funny and really kind. They’re just normal people. You know, people stare at them and ask them so many questions… I mean, I had a lot of those questions too but I think a lot of people expect them to be weirder.

So early on, I was trying to figure out how to make an interesting film that also shows them how they are completely well-adjusted adults.

M: How did you go about finding twins for this project? Were you intentionally looking for a wide age range?

S: I used a lot of things. First of all, I blasted social media, asking all my friends and anybody I knew if they knew of any twins. We picked a couple of days that we had studio space and had an open casting call. We held about half-hour interviews with each set of twins that came in. A big thing we did that really helped was putting an ad in the paper and that read, ‘Twins Needed!’ That ad really got around and got us some interesting people.

M: Were you actually filming each pair as you were interviewing them during the casting call sessions, or did these auditions act as more of a test run before being interviewed again?

S: We interviewed everyone once, and we filmed from the moment they walked in the studio. I didn’t feel like I needed to go see them in their homes or anything like that. I really wanted them to be a chorus, like in When Harry Met Sally. I wanted those interviews to feel very contained and different from the Allie and Gabby story.

M: What are Allie and Gabby up to now?

S: So coming out of school, they both got internships at the same company for PR. The company ended up hiring them both for the same position. They’ve actually become my best friends, so we’ve all seen other grow up and develop professionally. Their personalities are definitely starting to shine more separately than they ever have before.

About a year ago they started dressing differently. They adopted a dog and got an apartment where they had separate bedrooms for the first time in their lives. They recently were both looking for new jobs separately. They ended up being two of the three top candidates for the same position. Gabby was hired. Allie took it like a champ, but then the company that hired Gabby had an opening in a different department who ended up hiring Allie. So now they work at the same company but work on different teams. They are super happy about that.

M: You’ve worn many hats: writing, documentary filmmaking, producing, and more. What’s your favorite aspect of filmmaking? Do you like one more than the other, or most look forward to one over the other?

S: Yeah, directing is definitely number one. But I do also love writing and producing and editing. I enjoy the whole process. I mean, at some point, all aspects can get frustrating but I think ultimately directing is my favorite.

M: Have you always primarily been interested in documentary films?

S: Yeah, definitely. I like working with the smaller crew and I just really enjoy nonfiction. I exclusively read nonfiction and have always been drawn to creative nonfiction.

M: Let’s talk about your time teaching at Texas State University and UT Austin. Was teaching film always something you wanted to do, or did this more fall in your lap?

S: Well, I always have been very passionate about working with young people. I’ve been volunteering with an organization called the Hugh O’Brian Youth Leadership Conference since 2008. I went through that program when I was in 10th grade and I’ve volunteered there in multiple states since then. So I’ve always loved empowering people to go after their dreams, to try it and do it. To feel excited about their potential. That program helped me out a lot personally, so I wanted to give back and help others.

I’ve always had that part of my life. Teaching is something I really enjoy, and I think in a lot of ways it keeps you sharp. Like, they’ll ask you questions where you realize you hadn’t ever exactly learned the answer to that. Instead of just taking stuff for granted, or saying that that’s just the way it is, you’re definitely being pushed to learn new things and learn how to explain things better and be a better communicator. 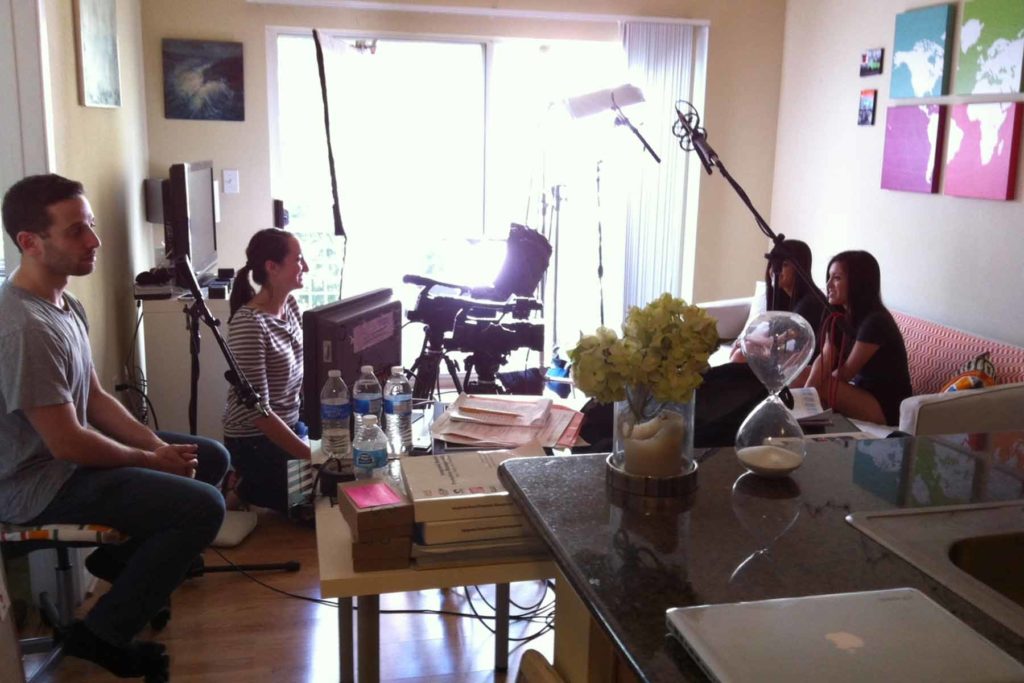 M: Can you talk a little about the Intro To Documentary class you teach? Is it a combination of theory and practice?

S: Yes, definitely a combination. I model it around Bill Nichols’ Modes of Documentary. He identified six different modes: poetic, expository, observational, participatory, reflexive and performative. We end up watching a lot of clips and short films. My hope is that when they come out of the class, they have personally expanded what their definition of documentary is. When it comes to practice, we do a lot of hands-on lab exercises that focus on really specific skills. Then we come back and watch them together and critique them.

M: What’s something that surprises you most about incoming classes? (their interests, type of media they’re into, what they want to do with their film degree)? Are you finding more and more that incoming freshman are into filmmaking for different reasons than your generation did?

S: I feel like teaching allows me to keep a finger on the pulse of what they’re watching. I guess I hadn’t watched a lot of classic films when I was their age, but they really don’t watch feature films….and a lot of them just don’t know what they want to do with the film major. But it is interesting, because sometimes I will ask them when they’ve seen a jump cut before and they’ll say on makeup tutorials on YouTube. And I’m like, “you’re not wrong…” They do watch a lot of TV. A lot of Parks and Rec, Insecure, The Bachelor…a lot of true crime and series.

I’m not sure if this is a huge trend or not, but this semester in my doc class they were really into personal and participatory style. Like, they hated observational for the most part. They really loved anything where the camera flipped to the filmmaker.

M: Do you feel like you have to make adjustments to your teaching style after each semester, depending on your class’s reaction? For example, when I took courses in film basics, I would have been shown Breathless to learn about the jump cut, but that just perhaps isn’t the best way to teach things to incoming students now.

S: Yes, I definitely make changes as things go along. I do still show Breathless when I talk about jump cuts. But I always try to do a classic example and then more of an example that they’d be into. I just try to include a lot of different types of media, so that maybe they are seeing connections between reality TV and documentary — to see how these styles work in different ways.

M: What do you see as the greatest benefit of going to film school in 2019, when so many filmmakers and creatives are finding success in a DIY world?

S: Network.You can learn all these things on your own. You can find books, you can look things up…but the things you can’t get out of a book are taste, watching something and discussing it with people, and being able to communicate your ideas and being able to provide thoughtful feedback. You know, figuring out how to work with people and hopefully coming out of film school with one or two people you love working with and can collaborate with in the future….

I think just having opportunities to learn from other people in a safe way and to have the stakes be really low rather than if you were jumping on a big set. Obviously, my expectations for you starting out are going to be different than if you are starting out on a professional set like that.

I’d also say finding the time and space to make your own work and having people around you who care and watch cuts and read your script…people who want to be invested in your growth. Especially those in grad school, having the time to work and explore your work as an artist — it’s such an amazing luxury, really.

You can watch “Her & Me” on Miniflix. Start with your free trial today.