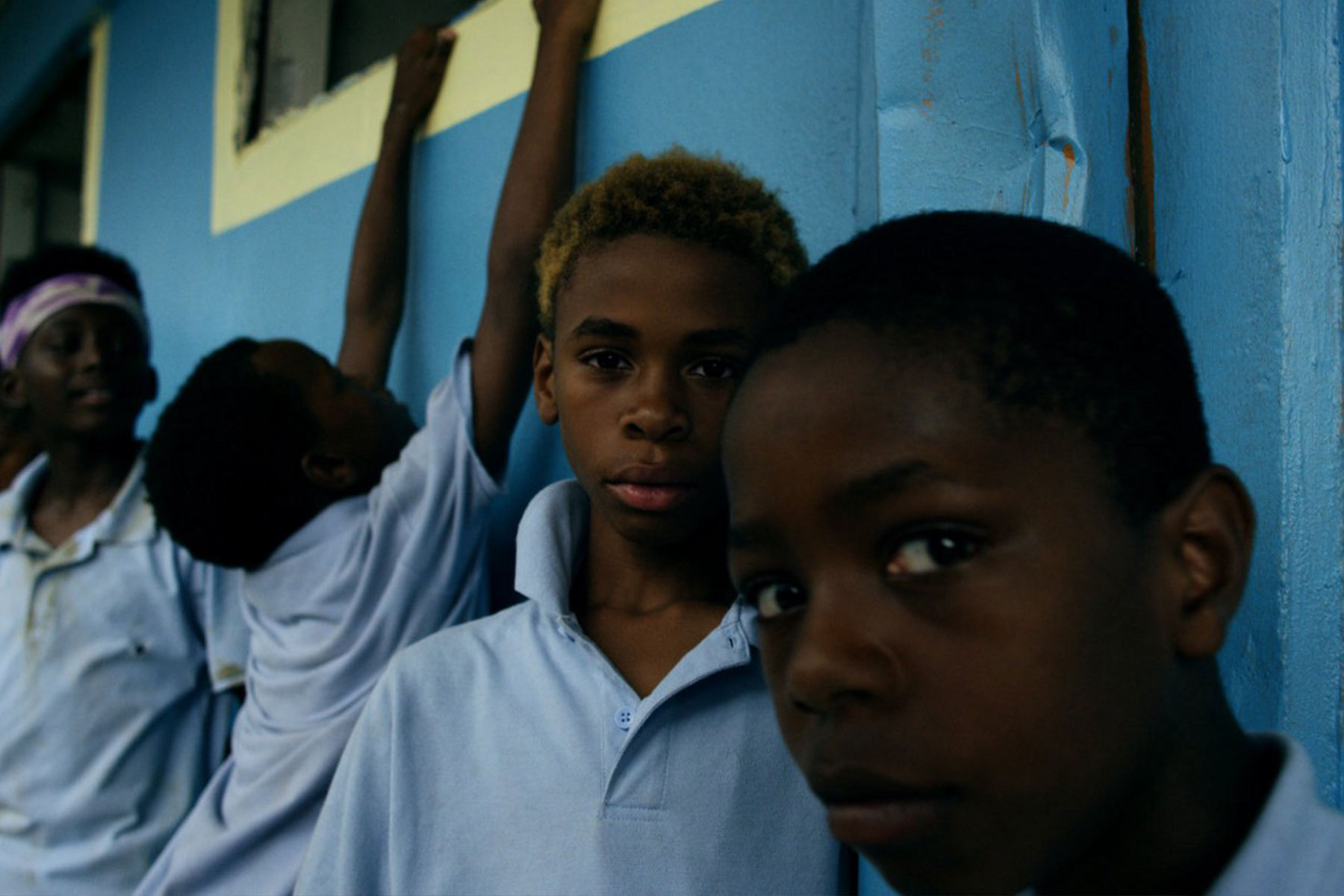 Once again, the Academy is revealing the shortlist for all three short film categories at one time. This year, the announcement will be made Monday, December 16th. With dozens of eligible short films in the running, it’s always an extremely competitive road to Oscar glory. Here’s our list of films we think have the best of being one step closer to an Oscar nomination.

Meryam Joobeur’s latest actually premiered over a year ago, back in September of 2018. However, this expertly-told tale of generational conflict really started to pick up steam at festivals in 2019, with wins at Aspen Shortsfest, Clermont-Ferrand, TIFF and many more. “Brotherhood” has plenty of momentum heading into Oscar voting — the question is whether it can edge out very stiff competition from around the world this year. It’s hard to beat this film’s visual beauty and thematic complexity — especially in under 30 minutes.

Don’t let the film’s title fool you into thinking this is a cute and cuddly film about Santa Claus. On the contrary, “The Christmas Gift” has enough harsh realism and political overtones to feel a million miles away from a holiday feel-good. The genius of Bogdan Muresanu’s much-acclaimed short is in mixing an edgy contemporary drama with a familiar Christmas story trope — a boy writing to Santa Claus. This multi-layered thriller has won at over 30 festivals, making it the winningest short on this list. The only question will be whether its success in Europe will translate to the U.S. and the Academy. Since it only had one U.S. win (Palm Springs) it’s hard to say yet. But if you see it on the shortlist, you can bet it’s making the final nominees.

One of the greatest things going for A.V. Rockwell’s evocative tone poem about a fictional boys school in the ruins of a coastal village is its visual and thematic connections with Moonlight. But this short is no carbon copy; Rockwell forges her own path by using the adolescence of an African-American boy to get at the key issues of our day. The film is both timely and deeply personal, offering a final catharsis that solidifies “Feathers” as one of the best shorts of the year. Add in the film’s incredibly unique score, inspired performances by a host of children actors and stunning production value to cap a short film that perhaps depicts 2019 America better than any other.

We think “Lavender” could be this year’s “Fauve”. Why? It’s the short with the most buzz by far this year, impressing the Fox Searchlight label enough to offer Matthew Puccini a major distribution deal on it. But what about the film itself? It’s impressionistic look at a complicated three-person romance feels fresh while rooting its characters emotions in the familiar and relatable. The three leads make the film’s world feel so lived in that, like the lead character at the end, we too are left wistful, nostalgic and ready to watch it all over again.

This sentimental modern-day take on Rear Window has been on our radar since its Tribeca premiere. Along the way, “The Neighbor’s Window” has picked up an audience award from Palm Springs, as well as several Best Narrative awards. We shouldn’t be surprised given that this is the narrative film debut of Marshall Curry, whose “A Night In The Garden” earned him an Oscar nomination just last year! While it’s rare for anyone to get nominated for an Oscar in back-to-back years, we think this story of a young couple’s fall into voyeurism has what it takes. Even rarer though are short films that look and feel this accomplished.

All On A Mardi Gras Day

It’s definitely a dark horse pick, but we think this day-in-the-life of a Mardi Gras Indian has everything that the Academy is looking for in a short documentary. It has complete command of tone and vision (helmed by Michal Pietrzyk, producer behind many hit television series). It touches on the social and cultural significance of Mardi Gras in New Orleans, along with an observation on the ways the city is changing. Most of all, it puts you in a world and a mindset that’s hard to shake after it’s over. With key festival wins at Seattle and Rhode Island, along with being a Tribeca nominee, we think “All On A Mardi Gras Day” has a great chance to sneak into the shortlist (and maybe even the final five).

Garrett Bradley has been blowing us away with her short documentary work for some time now, but “America” may the crowning achievement of her career so far. In an intoxicating blend of fact and fiction, Bradley choreographs a re-enactment of a lost silent film integral to understanding the African American footprint in cinema history. The cinematography is truly breathtaking, and while some voters may be turned off by its conflation of narrative and documentary techniques, we think its win at Sheffield (as well as an IDA nomination) shows that there’ll be some strong support from industry voters.

Last year’s Documentary Short Subject race involved lots of competition from the streamers, especially Netflix. So if we had to pick one Netflix short this year that has the best chance at an Oscar run, it’d be Bassam Tariq’s story of suburban youth. A Jury Award winner at Sundance and nominee for the Cinema Eye Honors puts it in pretty good condition to make the shortlist. This story of betrayal covers a lot of ground in 20-odd minutes, giving it the thematic heft of a feature but without any extraneous moments.

Learning To Skateboard in a Warzone (If You’re A Girl)

It’s not very often that you find a clear frontrunner in the Documentary Short Subject category, but we might have one this year in “Learning To Skateboard In A Warzone (If You’re A Girl)”. Winning at the International Documentary Association and at Tribeca, two festivals with great Academy Award documentary track records, is a huge vote of confidence for this poignant look at a nonprofit skate school that teaches girls from impoverished backgrounds.

Here’s another short on the outside looking in, having just recently had its premiere at NYFF 2019. Yet Theo Anthony, the acclaimed director by Rat Film, surely is on the radar of all the Oscar voters who love unconventional documentaries. Given that this deep dive look into the physics (and metaphysics?) of tennis is an ESPN 30 For 30 production, we wouldn’t be surprised if this film gets a nice promotional boost as award season gets nearer. Oscar night and sports stories have long been a happy pair, but the question will be whether the voting audience resonates enough with this analytical approach to the sport.

A 26-minute feast for the senses, “Acid Rain” is not only one of the most acclaimed animated shorts of the year — it’s one of the most acclaimed shorts period. Festival juries and audiences alike have been fully transported into this vibrant and hallucinatory “trip” of a film. Boasting some of the most transcendent animated cinema of the year, Tomek Popakul’s very rigorous aesthetic approach offers us a new way forward with this particular medium and mode of storytelling. Whether it’ll get the Oscar? It’s probably too ahead of its time — but a shortlist nod would not be a surprise at all.

I’m Going Out For Cigarettes

Osman Cerfon’s third short has really been making the rounds of the festival circuit, winning at Locarno and screening at Clermont-Ferrand and SXSW. The fact that it’s also up for an Annie Award speaks to its Oscar potential. Some may find this story of a disaffected twelve-year old a little cold to the touch, but with its operatic music cues and audacious final act, it’s hard not to at least appreciate the artistry on display. This is a short that really sticks with you — often the sign that an Oscar shortlist selection is all but decided.

In the short film world, 2019 may be best remembered as the year that Pixar wasn’t the clear favorite for an Oscara. That’s partially because the animation giants decided not to screen an original short before Toy Story 4. It’s also because they released their new SparkShorts label of animated minis, giving Pixar animators free reign to try edgier, less conventional stories. While many of them are excellent, the sheer number that have been released over the year makes us uncertain whether Pixar will even be represented in the Animated Short category this year.

As sure as Pixar dominance is the bet that at least one animated short from a rival studio will be in the running. In 2019 that film is “Hair Love” from Sony Pictures Animation. Like “Bao” last year, here’s another much-needed look at under-represented characters and cultures in the mainstream cinema. The animation is crisp and light, while the story is as touching as any Pixar could deliver. We really like this film’s chances in the awards race.

If the award were for best made animated film, “Daughter” would certainly take the cake. Daria Kashcheeva’s direction brings a handheld grittiness to a puppet animated short. From a formal perspective, “Daughter” is one huge leap forward in ambition and cinematic prowess. Yet the story too matches its form in intensity and focus. It’s a story about memory and facing the present moment, something we have all struggled with before. If this one makes the shortlist, look out Oscar!